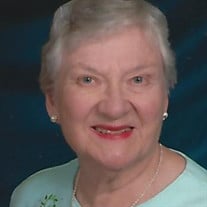 Dorothy (Lytie) Van Beaver-Tiede, loving wife, mother, and grandmother, passed into eternal life on March 1, 2021 on the 2nd anniversary of her eldest son’s death. She was the oldest of four daughters born to the late George and Mabel (Neumann) Lytie on September 21, 1929. She was raised on the Northeast side of Green Bay on the second floor of a cold water apartment on Harvey Street, just around the corner from her paternal grandparents, Gilbert and Henrietta (Halvorson) Lytie, who lived on Grove Street with some of her uncles. She moved to Farlin Ave. when she was 12 years old. She went to grade school through eighth grade at SS Peter and Paul, ninth grade at Washington Junior High, and graduated from Green Bay East in 1947. On September 4, 1948, she married Roger Van Beaver at the original First Evangelical Lutheran Church that still stands at the corner of Cherry and Van Buren streets. In order to save money, they were married in a private ceremony in the church office of Reverend E.H. Krueger, then had a small reception at her parents’ house on Farlin Ave. They honey-mooned in Milwaukee for two days, taking a bus as they did not have their own car. From this union came seven children: Bill, Sue, Gene, Gary, Roger, Jeff, and Kathy. They started out on S. Webster in a 2-room apt at the back of the house, then bought their first house in 1949 in the town of Preble. Dad had much of the money saved from the military paychecks he sent home to his mother during WW2 and got the balance from his maternal grandparents, Bill and Emma (Zeise) Huempfner. In 1956, they moved to South Clay Street in Green Bay, living across the street from Mom’s maternal grandparents, Ernest and Mary (Solper) Neumann. On December 16, 1982 Dad passed away after a battle with prostate cancer. In 1992, she married Warren Tiede. He preceded her in death. She was always there for her children. She made breakfast every morning, got the kids off to school and was there when they came home from school. She helped them with their homework during the week and Sunday school homework on Saturday. She reviewed the report cards and held the kids accountable. She loved music and brought the old upright piano from her home on Farlin Ave to her home on Clay Street so she could teach her kids and nieces to play. She made great fudge and chocolate chip cookies. She was a member of the Women’s Club at church, taught both Sunday and Vacation Bible School, and was involved with the PTA. In her later years, she enjoyed going out to lunch with her sisters, especially to the Grapevine Café, which her niece owns. She volunteered at Bellin Auxiliary. She was a member of First United Methodist Church and always talked about how warm and inviting everyone was. She loved re-connecting with her high school classmates and always talked about the great time she had with them at Harry Macco’s farm for their high school reunions. Finally, she took a great deal of pride in being a Wife, Mother and Grandmother; they were her most important roles in life. She is survived by her daughter Sue Van Beaver, son Gene (Jackie), son Gary (Julie), son Roger (Joan), son Jeff (Tammy), daughter Kathy Carroll (Bart), daughter-in-law Sandy Van Beaver, grandchildren and one step grandchild, great grandchildren and three step-great grand-children. She is further survived by her sister Donna Bartell, nieces, nephews, and friends. She was preceded in death by her husbands Roger Van Beaver and Warren Tiede; her son Bill, parents, George and Mabel (Neumann) Lytie; her sisters, Carole Siudzinski and Janice Kropp; her brothers-in-law, Larry Kropp, Bill Bartell and Francis “Butch” Siudzinski; mother in-law, Harriett (Hattie Huempfner) Van Beaver-Gilsoul; her step-father-in-law, Arthur Gilsoul; her daughter-in-law, Debbie Van Beaver, a special uncle of her husband’s, Milo Huempfner, who served as a substitute father for Dad when he was growing up and who was so helpful when they first married, including lending them his car when Mom was first pregnant, and Dad’s father, William Van Beaver, who passed away when Dad was 5 years old. Special thanks to Rev. David Kalas and Deacon Dave Wilkinson, friends and all the people who sent cards, messages and food. Also, thank you to the staff of Unity Hospice, especially Kim, Tara and Dani and Lauren Holloman of Prevea Clinic. Finally, a very special thank you to her daughters Sue and Kathy who provided constant and loving companionship in her last days. Due to the Pandemic a private memorial service will be held. Masks and social distancing will be required. The memorial service will be live-streamed through First United Methodist Church of Green Bay. Memorials can be made out to First United Methodist Church, 501 Howe Street, Green Bay, Wi. 54301 Rest in Peace, Mom. You were a kind and loving person.

Dorothy (Lytie) Van Beaver-Tiede, loving wife, mother, and grandmother, passed into eternal life on March 1, 2021 on the 2nd anniversary of her eldest son&#8217;s death. She was the oldest of four daughters born to the late George and Mabel... View Obituary & Service Information

The family of Mrs Dorothy J. Van Beaver-Tiede created this Life Tributes page to make it easy to share your memories.