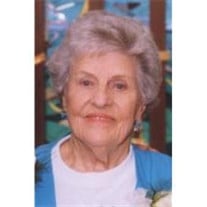 Dorothy Enid Biebel, 95, waltzed into paradise January 27, 2009 humming a Strauss melody. Dorothy was born Nov. 24, 1913 in Green Bay, the first of two daughters born to George and Clara (Zimonick) Bouche. She attended St. Francis Xavier Cathedral parish school for grades 1 - 10, transferring to East High School for grades 11 and 12. On Dec. 27, 1934, Dorothy married her grade school sweetheart, Ray Biebel, at St Francis Xavier Cathedral, a loving partnership that continued until his death in 1996. They have two children, Susan Rae and Paul Robert. A lifelong member of Cathedral parish, Dorothy was active in the St. Ann Altar Society, and served as a lector and Eucharistic Minister with the parish. She belonged to the Catholic Woman’s Club, was a 10-year sustaining member of The Service League, also serving on the board and one year as social chair of the annual Charity Ball. Dorothy also was a board member of the Family Service Society, was active with the Green Bay/De Pere Antiquarian Society and, with Ray, belonged to the Ambassador Club and the Neighborly Dance Club. Dorothy enjoyed the company of her many wonderful friends of the Shorewood Ladies Golf League, as well as those of her Eating, Birthday and bridge clubs. Though her formal education ended with high school graduation, Dorothy never stopped learning due to her interest in and passion for poetry and literature, art, music, world events, and travel. She considered herself fortunate to have traveled extensively, deriving great pleasure from excursions to many parts of the world, including the U.S. and Mexico, South America, the former Yugoslavia, many countries in Europe and, in her 80s, cruising the rivers of Russia. She spoke often of the unforgettable trip with Ray when they embarked on the U.S. Constitution and the thrill of passing the Statue of Liberty as they left New York and the Rock of Gibraltar as they entered the Mediterranean. Those close to Dorothy will remember her deep, hearty laugh, her “naughty” sense of humor and appreciation for a bawdy joke. She was a cultured, widely-read woman with a passion for literature and music, and recited, practically to her dying day, poetry memorized early in life. Despite extraordinary recall and vivid memories of people, places, events (and secrets) of her long life, Dorothy was not one to live in the past. She was a classy lady with a passion for jewelry and scarves which she wore with style. Her gifts were many, not the least of which was an impressive ability to laugh at herself. Some will remember especially her competitive nature at cards. She was a gifted artist who painted in various media; she loved to cook, set a lovely table and entertained with panache. In recent years, Dorothy was considered the unofficial social convener at The Crow’s Nest where she lived for the past ten years. Dorothy served as role model of aging gracefully and with dignity, adapting and adjusting to the limitations of advanced years. She gave up driving voluntarily when she realized macular degeneration affected her vision and she feared herself a danger to others. Hardest to relinquish were trips out of state to spend time with cherished grandchildren and great grandchildren. She missed also the Sarasota condo where she wintered for many years and where she and Ray made many friends. Ready to greet Dorothy as she enters her eternal reward are her husband Raymond Milton Biebel; her parents; a sister, Lois Jane Bouche; half-brother James Vanden Boom; son-in-law Diego Redondo; and granddaughter Mary Regina Redondo. Dorothy is lovingly remembered by her daughter Susan Redondo, Grayslake, Illinois; son Paul and his wife, Barbara, Green Bay; five grandchildren: Diego (Marilyn) Redondo, Pompton Lakes, New Jersey; Dorothy (Michael) Sterner, Lake Villa, Illinois; Peter (Emily) Redondo, Wake Forest, North Carolina; Ramon (Cari) Redondo, Marion, Iowa; and Charles (Angela) Biebel, Eagan, Minnesota; and 14 great grandchildren. Dorothy is survived also by sister-in-law Beverly Vanden Boom, nieces, nephews, cousins, and many friends. Gathering of family and friends will be held from 12:00 P.M. (noon) to 3:00 P.M. on Sunday, February 1, 2009 in the Resurrection Chapel at Saint Francis Xavier Cathedral 140 S. Monroe Avenue. There will be no visitation the day of the funeral. Mass of Christian Burial will be held at 10:00 A.M. on Monday February 2, 2009 at the church with Rev. James Samter officiating and Msgr. Roy Klister concelebrating. Burial at Allouez Catholic Cemetery. In lieu of flowers, memorials in Dorothy’s name are suggested to Unity Hospice (Community Beds Fund), 2366 Oak Ridge Circle, De Pere, WI 54115; or Wisconsin Regional Library for the Blind, c/o Milwaukee Public Library, 813 W. Wells St., Milwaukee, WI 53233 The family wishes to acknowledge the caring and professional attention Dorothy received from all the staff at the John and Engrid Meng Residence at Unity Hospice.

The family of Dorothy Biebel created this Life Tributes page to make it easy to share your memories.

Send flowers to the Biebel family.