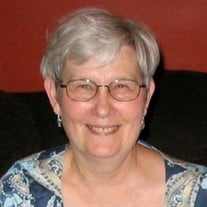 Doris M. Griffin, 76, Allouez, passed away unexpectedly on Sunday, July 31, 2016 at Bellin Memorial Hospital. Doris was born on May 30, 1940 in Green Bay to the late Bernard and Marion (Schwade) Selissen. She was a graduate of Green Bay West High School. On March 25, 1971, she married Michael Griffin at St. Joseph’s Catholic Church in Green Bay and the couple enjoyed over 41 years together. Mike preceded her in death on May 3, 2012. Doris started her career in the banking industry as a teller when she was 18 at what was then West Bank & Trust on Broadway and later moved into Commercial Loan Operations where she worked the majority of her career. She retired from Associated Bank in 2005. Doris was an avid reader and gardener who loved cooking and baking. Her cookies, brownies, and pies were widely heralded and quickly consumed by family and friends. An animal lover, she faithfully defended her beloved cat Louie against all manner of unjust criticism. Doris is survived by her son Douglas Griffin and her former daughter-in-law Deborah, Madison; two sisters and brothers-in-law Rose and Mike Denissen, Allouez; Bea and Richard McAllister, Colgate; and one sister-in-law Carol Selissen, Hobart. She is further survived by many nieces, nephews, cousins, other relatives, and friends. She was preceded in death by her parents, two brothers and one sister-in-law James Selissen, Gerald and Patricia Selissen, one sister-in-law Mary Garfield. Gathering of family and friends will be held from 9:30 A.M. to 11:00 A.M. on Thursday, August 4, 2016 in the chapel at Allouez Chapel Mausoleum 2121 Riverside Drive. A Prayer Service will be held at 11:00 A.M. The family would like to offer a special note of appreciation to Kathy Heraly and Kay Klatt for all of their friendship through the years and being there for Doris. In Lieu of other expressions of sympathy, Memorial Donations may be made to the Bay Area Humane Society 1830 Radisson Street Green Bay, WI 54302

Doris M. Griffin, 76, Allouez, passed away unexpectedly on Sunday, July 31, 2016 at Bellin Memorial Hospital. Doris was born on May 30, 1940 in Green Bay to the late Bernard and Marion (Schwade) Selissen. She was a graduate of Green Bay West... View Obituary & Service Information

The family of Mrs. Doris M. Griffin created this Life Tributes page to make it easy to share your memories.

Send flowers to the Griffin family.