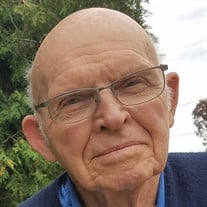 Donald "Don" Charles Roche 94, passed away on October 31, 2020 in Portland OR. Born June 30, 1926 in Neshkoro, WI, the son of the now late Stephen and Freda Roche, Don grew up on the family farm with brothers Norlin and Jerry and sister Karen. Don served his country in the U.S. Marine Corps, stationed in the Pacific Ocean theater during World War II. After the war he relocated to Green Bay and graduated from St. Norbert College, De Pere WI. Don meets the love of his life Ruth Ann Roche(Miller) while both were working at Pranges Department Store. They married on June 28, 1952 at St. Matthew's Catholic Church in Allouez and raised three children, Lynette Ann, Patrick James, and Kim Marie. He and Ruth lived in their family home until Ruth, his wife of 67 years, passed last year. As avid Green Bay Packers fans, Don and Ruth were not to be disturbed on game days. Don proudly ushered in the original Packer stadium . Don enjoyed his career working as a sporting goods salesman. Being a family man, Don loved playing with the children and grandchildren. He liked puttering in his basement workshop, exploring with Ruth in their Chinook camper, reading, feeding the birds and squirrels, international travel, visiting family, and chatting with friends and neighbors. His sweet tooth was pacified with a cookie. Don was a good man, jovial and upbeat, considering himself lucky in life. Don is preceded in death by wife Ruth August 2019, infant daughter Mary, son Patrick 2014, brothers Norlin(Hal) and Jerry and sister Karen Harke. He is survived by daughters Lynette(Dale) Lucht of Eden Prairie, MN and Kim Roche and Charles Berry of Portland OR; two grandchildren Steven (Heather) Lucht, Kelly (Shaun) Opsahl, four great grandchildren Katelyn and Brandon Lucht, Taylor and Chace Opsahl. He is further survived by nieces, nephews, and other friends and relatives. Don was loved. He will be greatly missed. Arrangements are pending.

Donald "Don" Charles Roche 94, passed away on October 31, 2020 in Portland OR. Born June 30, 1926 in Neshkoro, WI, the son of the now late Stephen and Freda Roche, Don grew up on the family farm with brothers Norlin and Jerry and sister Karen.... View Obituary & Service Information

The family of Mr. Donald "Don" Roche created this Life Tributes page to make it easy to share your memories.

Send flowers to the Roche family.