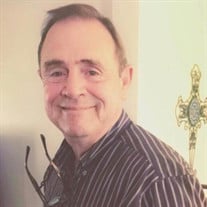 Donald Charles Conn, age 69, of Green Bay, passed away on Monday, July 27, 2020 at Aurora Medical Hospital. Donald was born in Antigo on October 17, 1950 to the late Donald and Dorothy (Bohlman)Conn. Donald is survived by: his wife Terri Ann... View Obituary & Service Information

The family of Mr. Donald Charles Conn created this Life Tributes page to make it easy to share your memories.

Send flowers to the Conn family.