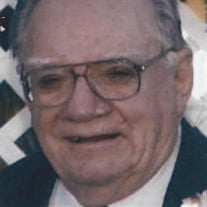 Donald E. Clusen, age 95, a longtime resident of Allouez passed away on December 5, 2017 from complications of age at Aurora Baycare Medical Center in Green Bay. He was born in Two Rivers, WI to Albert and Neida (Thompson) Clusen on June 14, 1922. He was a 1940 graduate of Washington High School, Two Rivers and a 1944 graduate of the University of Wisconsin – Madison . On August 11, 1945, he was joined in marriage to (Leah) Ruth Chickering of Waukesha WI, who preceded him in death on March 14, 2005. After their marriage, they worked together as teachers on the Blackfoot Indian Reservation, Browning, Montana before returning to Wisconsin where Don began teaching at the Wisconsin State Reformatory in Green Bay. Don went on to hold several positions at what has become the Green Bay Correctional Institution, including Assistant Superintendant for both Treatment and Security, and then Warden, retiring in 1991, after 46 years of service. In 2009, he married the former Dorothy Johnson, who survives him. In the 3 years prior to his last illness, Don lived at Allouez Parkside Village, where Dorothy faithfully assisted in his care and comfort. In addition to Ruth, he was preceded in death by his parents, his brother John, and numerous cousins. He is survived by Dorothy and his daughters. Kathryn Clusen of South Milwaukee WI and her daughters, Christine (Brandie) LeClair, Charlotte NC and Jennifer (Garrett) Becker, South Milwaukee WI, great grandson Chase. His daughter Elizabeth (Jim) Joannes of Prescott AZ and their sons, Cpt. (US Army) Michael Joannes (fiancé Aziza Zekiroski), Alexandria VA and Christopher (Aubry) Joannes, St. Louis MO. He is further survived by nephews Paul Clusen, Channahon, IL and Charles Clusen, Arlington VA. Gathering of family and friends will be held from 9:30 A.M. to 11:00 A.M. on Friday, December 8, 2017 at First United Methodist Church 501 Howe Street. A Funeral Service will be held at 11:00 A.M. with Rev. Dave Wilkinson officiating. Burial will take place at Evergreen Cemetery next to his wife Ruth. In lieu of other expressions of sympathy Memorials may be directed to the Alzheimers Association, in c/o Southeast Wisconsin Chapter P.O. Box 96011 Washington, D.C. 20090-6011 The family would like to offer a special thank-you to the staff of Allouez Parkside Village for the wonderful care and friendship shown to Don. Also, a warm note of appreciation to the staff of Aurora BayCare Medical Center for all of their care and compassion~ your kindness will never be forgotten.

Donald E. Clusen, age 95, a longtime resident of Allouez passed away on December 5, 2017 from complications of age at Aurora Baycare Medical Center in Green Bay. He was born in Two Rivers, WI to Albert and Neida (Thompson) Clusen on June 14,... View Obituary & Service Information

The family of Mr. Donald E. Clusen created this Life Tributes page to make it easy to share your memories.

Send flowers to the Clusen family.