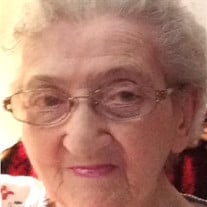 Dolores E. Andre, 89, Green Bay passed on to her Saviors arms on Friday February 24, 2017. Dolores was born on July 1, 1927 in New Denmark the daughter of the now late Edward and Lena (Snortum) Barth. On February 15, 1947 she married Julius “Nig” Andre at St. John’s Lutheran Church in Wrightstown and the couple enjoyed almost 54 years together. Nig preceded her in death on February 2, 2001. Dolores had a very pure heart and always found the good in everyone she met and greatly cared for the people in her life. Family was the most important thing to her, she always made her husband and children her first priority. Dolores was a loving wife, mother, grandmother, great-grandmother, sister and friend to many and she will always be lovingly remembered and sorrowfully missed. She was very patriotic and loved her country and was very proud of our Military and the service they provided. Dolores was an extremely humble person throughout her life and relied on her faith and prayers to make a difference. She was a faithful servant who always gave to others before herself. Dolores is survived by one daughter and son-in-law Cheryl (Jim) Georgia, three sons and daughters-in-law Paul (Marlene) Andre, Gary (Sandy) Andre, Scott (Barb) Andre, grandchildren and great-grandchildren, one sister Mardell Winiecki. She is further survived by nieces, nephews, other relatives and friends. She was preceded in death by one grandson Scott A. Andre, three brothers and sisters-in-law Roy (Carol) Barth, Earl (Mary) Barth, Harold (Phyllis) Barth, one brother-in-law Clarence Winiecki. Gathering of family and friends will be held from 9:30 A.M. to 11:30 A.M. on Tuesday, February 28, 2017 at Trinity Lutheran Church, 330 S. Broadway Street. A Funeral Service will be held at 11:30 A.M. with Rev. Rachel Knoke officiating. Burial at Woodlawn Cemetery, Allouez.

Dolores E. Andre, 89, Green Bay passed on to her Saviors arms on Friday February 24, 2017. Dolores was born on July 1, 1927 in New Denmark the daughter of the now late Edward and Lena (Snortum) Barth. On February 15, 1947 she married Julius... View Obituary & Service Information

The family of Mrs. Dolores E. Andre created this Life Tributes page to make it easy to share your memories.

Send flowers to the Andre family.