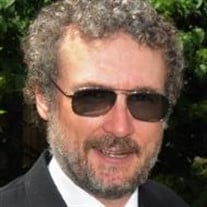 Dennis J. Gauger, age 62, passed away peacefully at his home in Green Bay Wednesday February 10, 2016 surrounded by loving family. He was born March 14, 1953 in Milwaukee to Harold and Elizabeth Gauger. Dennis felt privileged to have had the “best boyhood” growing up on Kangaroo Lake, Baileys Harbor experiencing waterskiing, sailing, fishing and hunting with his faithful dog Shep. A solo sailing adventure as a teenager led to a chance encounter with his future lovely wife and a lifelong shared 36 years of adventure. A graduate of NWTC, Dennis began his career at age 20 in sales with VanDrisse Lincoln Mercury. At age 21 he obtained his Wisconsin real estate broker’s license and managed rental property. Several years later Dennis earned his coastguard captain’s license and operated the Finn&Feather 150 passenger excursion boat for 25 years. Most recently his entrepreneurial spirit led to creating and managing an annual antique sporting and collectible show. One of his greatest pleasures was guiding his family and friends on many wilderness adventures; hunting, fishing, sailing and Alaskan travel. Dennis cherished every moment with his family, was very proud of his two sons and delighted in his adoring granddaughters. Toward the end he reminisced with gratitude for the many good friends who shared their lives with him, including those with whom he had lost touch. In Dennis’s own words “I had a good life-no regrets”. Dennis will be missed by his devoted wife Terry Smith, sons Brandt Gauger, Green Bay and Tanner Gauger (Angie and their daughters Libby and Emily) Appleton. Brother Ron(Sheri) Gauger, Manitowoc, Sisters Joan Holt, Manitowoc, and Carol(Dick) Goss, Lake Zurich, IL., many amazing nieces and nephews. Besides his parents he was preceded in death by a special nephew Casey Holt. A gathering of family and friends will be Saturday February 13 2016 from 8:30-10:30 AM followed by mass at 10:30 AM officiated by Bishop Robert Morneau.In lieu of flowers a memorial fund is being established. Our family wishes to thank Green Bay Oncology, Livestrong YMCA, St. Vincent and Froedert hospitals, Unity hospice and all who helped Dennis transition toward as he stated “his next great adventure”.

Dennis J. Gauger, age 62, passed away peacefully at his home in Green Bay Wednesday February 10, 2016 surrounded by loving family. He was born March 14, 1953 in Milwaukee to Harold and Elizabeth Gauger. Dennis felt privileged to have had the... View Obituary & Service Information

The family of Mr. Dennis J. Gauger created this Life Tributes page to make it easy to share your memories.

Dennis J. Gauger, age 62, passed away peacefully at his home...

Send flowers to the Gauger family.