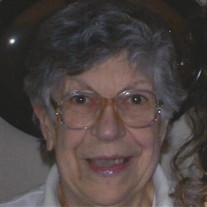 Delores Romaine Davies, July 10, 1925-July 2, 2015. As her mother before her, Dee left us days from her 90th birthday. She was orphaned shortly after birth and adopted at 6 weeks by Henry and Laura (Flavion) Fayas. Although an only child, she was close to many of her 150 first cousins. Dee started working at age 14 when her dad fudged her birth date so she could get a driver’s license to help with his trucking business. At Casco High School (where she graduated at age 16, after skipping 2 grades) she played trumpet in the band and enjoyed drama cub. She worked at the Bank in Rio Creek until she married the boy (at the cottage) next door, Richard (Dick) M. Davies on October 6, 1951. A stay-at-home mom until all her children were in school, she then worked at Kitslaars Interiors until her “retirement” job of helping her daughter Jill in the chiropractic office and babysitting, often at the same time. Delores is preceded in death by her parents, husband Dick, in-laws Nelson and Helen (Blackman) Davies, grand-daughter Chandra Noel, great-grandson Cameron Richard, sister-in-law Ellen (Pete) Peterson and brother-in-law Chester Felton. Dee’s stories (she never let reality get in the way of a good story) will be missed by her children, Gregory and Jill (Nate Kern), Green Bay; Anne, Europe; Eve (Scott Pfitzinger), Ohio. Grandchildren Keanen (Ellen), Evan, Alaric (Angelica), Blaise and Camber. Great grandchildren Landon, Addie, Raylan, Cynan and Owain. Sister-in-law JoAnn Felton, nieces, nephews, cousins, and friends at Country Bible Church in Luxemburg. Join us at Graceway Fellowship, 1750 Dousman Street in Green Bay, on Tuesday July 7, 2015 from 5:00 P.M. to 7:00 P.M. for visitation. Wednesday, July 8, 2015 visitation 1:00 P.M., a Memorial Service to follow at 2:00 P.M. In lieu of flowers, donations may be made to Upper Peninsula Bible Camp. Special thanks to Tracy and Cindy at Unity Hospice, Dr. Biernat at Bellin and Alaric and Angelica Pfitzinger for their loving care.

Delores Romaine Davies, July 10, 1925-July 2, 2015. As her mother before her, Dee left us days from her 90th birthday. She was orphaned shortly after birth and adopted at 6 weeks by Henry and Laura (Flavion) Fayas. Although an only child,... View Obituary & Service Information

The family of Mrs. Delores Romaine Davies created this Life Tributes page to make it easy to share your memories.

Send flowers to the Davies family.