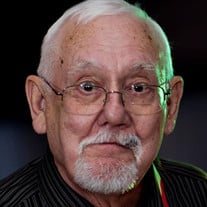 Delbert (Del) John Cornette, 77, died June 21, 2015 at home after a short illness. He entered this world on February 28, 1938; the son of the late Bert and Genevieve Cornette and from that day forward lived his life to the fullest. His interests were many and varied. He enjoyed a good debate no matter the topic. One of his greatest loves was fishing-particularly in the lakes of Florida, but any lake at all would do. He passed this love of fishing on to many of his grandsons, as well. He relished keeping his mind active and, being easily bored, he read hundreds, if not thousands of books on a wide variety of topics-always searching for new knowledge. He enjoyed the many friendships he formed playing Schafkopf at his card clubs and volunteering at the VA Clinic, providing Veteran transportation as well as his Wyze Men’s Group. As his duties as Mr. Mom subsided he proudly completed a Master’s Degree in Metaphysical Theology and a Doctor of Ministry. He will be greatly missed by his wife of 35 years Jane Snyder, daughters Risa Cornette, Tami Cornette (Rob Morris), Lori (Curt) Dallaire, Caryn (John) Forrest, Melissa (Scott) Wilde, Chayce Cornette, son Dillon Cornette, grandchildren Nicholas (Kendra) Zepnick, Brooke Zepnick, Kate Dallaire, Taylor Brice, Logan Brice, Kristopher Dallaire, Gray Wilde, Lauren Wilde, and great granddaughter Maisy Zepnick. He will be remembered by his surviving brother and sister and their families along with many in-laws, their families as well as many close friends. He was preceded in death by his son Christopher, former wife, Mary Cornette, one brother, one sister, his mother in-law, father in-law and one sister-in-law. Funeral arrangements are being handled by Hansen Family Funeral and Cremation Services. Per Del’s request no formal funeral or visitation services will take place. There will be a private gathering of family on July 1, 2015. A special thank you to Unity Hospice for their loving care and support. In lieu of flowers or gifts please send a donation to End Domestic Abuse Wisconsin 1245 E Washington Ave, Suite 150, Madison, WI 53703.

Delbert (Del) John Cornette, 77, died June 21, 2015 at home after a short illness. He entered this world on February 28, 1938; the son of the late Bert and Genevieve Cornette and from that day forward lived his life to the fullest. His interests... View Obituary & Service Information

The family of Mr. Delbert "Del" J. Cornette created this Life Tributes page to make it easy to share your memories.

Send flowers to the Cornette family.