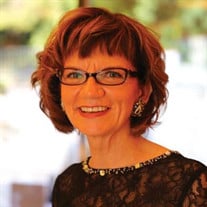 Deborah Ann Gungor, 63, of Green Bay, WI, died on Friday, December 15th at her home. Born February 16, 1954 as Deborah Ann Stabnow, she grew up with her family in Greenwood, WI. After graduating high school in 1972, she married her high school sweetheart Mark Gungor of nearby Neillsville. The Gungors then helped form one of earliest Christian rock bands and Debbie was the lead vocalist. They traveled all over the US and Europe for 5 years, performing in everything from simple tent meetings to elaborate cathedrals and famous music halls to dingy discoteques. Their daughter Leslie was born in Gothenburg, Sweden while on tour. The Gungors then entered the ministry and served in churches in Monroe, WI (where they added their son Phillip to the family), Waukegan, IL, Decatur, IL, Marshfield, WI, Green Bay, WI, Stevens Point, WI and finally back to Green Bay where they served at Celebration Church. In 2003, Mark and Debbie began doing marriage seminars called “Laugh Your Way to a Better Marriage”. They have traveled World-wide sharing their stories and insights into how to have a healthy and successful marriage. Debbie was affectionately known to millions of people as “The Redhead” who inspired women to succeed as wives and mothers. While Debbie’s public life touched so many, her single greatest joy was spending time alone with her grandchildren. In 1997 Debbie was diagnosed with malignant melanoma and a few years later with breast cancer. For 20 years she bravely fought the cancers, but on Friday December 15, with her husband of almost 45 years by her side, she took her last breaths and stepped into the arms of Jesus. Debbie was preceded in death by her father William Bernard Stabnow of Greenwood, WI. Debbie is survived by her mother Beverly June Wherman, husband Mark Gungor, daughter Leslie Skorzewski and her husband Ross and their children Keyan and Mya, son Phillip Gungor and his wife Kirsty and their children Parker, Monty, Elliot and Scarlet, brother Randy Stabnow and wife Lynn, sister Valeri Lake, brother Galen Thorson and wife Avis, brother Mark Thorson and wife Lisa. Visitation will be Thursday December 21st, 2017 from 1:00 p.m. until 6:30 p.M. with the funeral service following at 7p. Visitation & Service will be held at Celebration Church, 3475 Humboldt Road, Green Bay, WI 54311. Service will be officiated by Bishop Gary Rivas of South Africa and Bishop Ed Gungor of New York. Entombment at Shrine of the Good Shepherd Chapel Mausoleum.

Deborah Ann Gungor, 63, of Green Bay, WI, died on Friday, December 15th at her home. Born February 16, 1954 as Deborah Ann Stabnow, she grew up with her family in Greenwood, WI. After graduating high school in 1972, she married her high school... View Obituary & Service Information

The family of Mrs. Deborah Ann Gungor created this Life Tributes page to make it easy to share your memories.

Send flowers to the Gungor family.