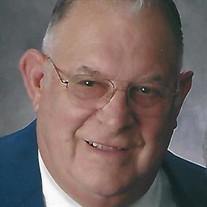 David W. Van Horn, 83 of De Pere was called home on August 7, 2019. Dave was born to the now late Edward and Violet Van Horn on November 16, 1935. Dave married the love of his life Janice (Rogers) on August 14, 1954. Together Dave and Jan raised five children, Sharon (Gordon) Sannes, Bruce (Jane) Van Horn, Wendy (Allen) Duerr, Lisa Perrizo and Brian Van Horn. The family tree continues to grow from there, 10 grandchildren; 20 great grandchildren; and one due around his birthday in November. Dave is also survived by a sister Sue (Jon) Wachs and a sister-in-law Vickie Van Horn and other extended family. He is also survived by 2 Godchildren Jenny Whitefield and Sara Osawe. Dave was employed by the City of Green Bay Public Works Street Department for 35 years. During his tenure at the City, he operated many pieces of equipment, but his favorite was plowing snow. Dave truly enjoyed the people he worked with and serving the people of Green Bay. After retirement, Dave looked forward to Tuesday morning breakfast with fellow retirees. He was actively involved with the Howard Suamico Historical Society and a member of St. Joseph's Parish in Green Bay. Dave loved his family beyond words and was always there for them. He had a wonderful sense of humor and could always be counted on for a laugh or two. He loved grocery shopping and getting a deal! He also shared a love for music, camping and traveling. His son Bruce, along with an infant sister Becky, and a brother Harold preceded him in death. Gathering of family and friends will be held from 9:00 A.M. to 11:00 A.M. on Friday, August 9, 2019 at St. Joseph Catholic Church, 1224 12th Avenue. A Mass of Christian Burial will be held at 11:00 A.M. Burial at Fort Howard Memorial Park. The motto Dave practiced was “NEVER CONSIDER A DAY COMPLETE WITHOUT DOING A GOOD DEED FOR SOMEONE.” Truck 39 signing out !

The family of Mr. David W. Van Horn created this Life Tributes page to make it easy to share your memories.