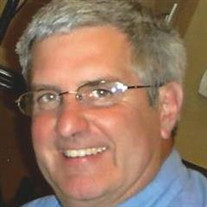 David J. Smits, 61, Green Bay passed away peacefully with his family by his side after a strong fight against pancreatic cancer. He was born on November 15, 1953 in Green Bay, the son of Richard and Barbara (LaPlant) Smits. He instilled a great love for the water and boating in his family. He also enjoyed the driving range and playing golf. He was most proud of his role as husband, father, and grandfather. His hearty laughter was contagious and his quick wit would undoubtebly leave you smiling! Dave is survived by his loving wife, Pat, of 38 years; his three children, Michael Smits, Laura and Derek LeClaire and their three children (Jayden, Ashlynn and Jayce), Lisa Smits and Mike Maes and their son – due in July; his parents Dick and Barb Smits; his siblings Julie and Rick Groonwald, Rob and Mina Smits; his in-laws Jim Wetli, Dan and LeeAnn Wetli, Dick Wetli, Bob and Vicki Wetli, Mary Sickel, Cheryl and Dennis McGregor, John and Linda Wetli. He is further survived by many loving nieces, nephews, other relatives and friends. He was preceeded in death by his grandparents, John and Dorothy Smits, Philip and Martha LaPlant; his father-in-law and mother-in-law, Jerome and Ann Wetli; and a special brother-in-law Dan “Sid” Sickel. In accordance with Dave’s wishes, a private service was held for immediate family. In lieu of other expressions of sympathy, a memorial fund has been established in his name. Our family would like to express our appreciation to all of those who called, visited, sent cards of encouragement, and dropped off food – your kindness will never be forgotten. A special thank you to Bellin Oncology – Dr. Kelly Lynch and staff, Dr. Amy James who portrayed the true meaning of a guardian angel throughout Dave’s journey, and to Heartland Hospice (Jen, RN and Heather, CNA). We will never forget the loving support you extended to Dave and our family.

David J. Smits, 61, Green Bay passed away peacefully with his family by his side after a strong fight against pancreatic cancer. He was born on November 15, 1953 in Green Bay, the son of Richard and Barbara (LaPlant) Smits. He instilled a... View Obituary & Service Information

The family of Mr. David J. Smits created this Life Tributes page to make it easy to share your memories.

David J. Smits, 61, Green Bay passed away peacefully with his...

Send flowers to the Smits family.