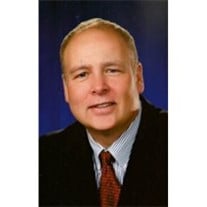 David W. Brown, 50, Neenah, passed away unexpectedly on Saturday, March 3, 2012. David was born on September 19, 1961 in Milwaukee the son of Robert and Carolee (Gehring) Brown. He attended Chapman University in California where he obtained his B.S. Degree in Electronic Technology. David furthered his education at Phoenix University obtaining his Masters Degree in Business Management. He served his Country in the United States AirForce as an integrated Avionic Tech Specialist where he worked on the F1-11D. David was also an FTD Instructor until his honorable discharge in 1994. On August 1, 1980 he married the former Dorothy Hruska at St. Mary of the Angels Catholic Church. They moved back to Wisconsin in the fall of 2010 where David accepted a position at Oshkosh Corp in the Risk Management Division as a Project Manager. David had an entrepreneurial spirit and enjoyed spending his spare time in his workshop. He was an extremely faith filled man, beautiful inside and out. David loved his family and always looked out for them and put their needs ahead of his own. He was a wonderful husband, father, son and will always be lovingly remembered and sorrowfully missed. David is survived by his loving wife Dorothy, his children Chastity (Sean) Kopeny, Dana Point, Ca; Gavin Brown, Garet Brown, Gerard, Geofrey, and Angeline all of Neenah, his parents Robert and Carolee Brown, his siblings, Robert Brown, William (Beth) Brown, Mary (Eric) Thielen, Kathy (Greg) Enderby, Jim (Sara) Brown, his mother-in-law and father-in-law Eugene N. and Virginia F. Hruska, one sister-in-law Barbara Maufort, one brother-in-law Gregory Hruska. He is further survived by many nieces, nephews other relatives and friends. He was preceded in death by a brother-in-law Thomas Maufort, and an infant brother-in-law Gerard Hruska. Gathering of family and friends will be held on Friday, March 9, 2012 from 9:00 A.M. to 11:00 A.M. at St. Mary of the Angels Catholic Church 645 S. Irwin Street. A Funeral Mass will be held at 11:00 A.M. with Father Patrick Gawrylewski, O.F.M. officiating and Father Mark Vander Steeg concelebrating. In Lieu of other expressions of sympathy a Memorial Fund has been established at Wells Fargo Bank in c/o David Brown Memorial Fund. The family would like to offer a warm note of appreciation to those “Angels” who came to help David. Also, a special thank-you to the First responders and the E.R. Staff at Theda Clark Memorial Hospital for all of their efforts.

David W. Brown, 50, Neenah, passed away unexpectedly on Saturday, March 3, 2012. David was born on September 19, 1961 in Milwaukee the son of Robert and Carolee (Gehring) Brown. He attended Chapman University in California where he obtained... View Obituary & Service Information

The family of David W. Brown created this Life Tributes page to make it easy to share your memories.

Send flowers to the Brown family.