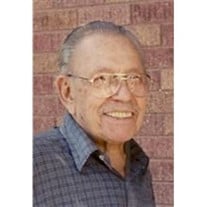 David J. Blozinski, 93, Green Bay passed away peacefully at his home on Monday, October 22, 2012. David was born on December 8, 1918 in Rothschild, WI the son of the now late Michael and Celia (Wozniak) Blozinski. On September 20, 1939 he married the former Arbutus “Beauty” LeCoque at SS Peter & Paul Catholic Church. David enlisted in the U.S. Navy in May of 1944 and served his country during W.W. II aboard the naval tender vessel USS Whitney stationed in the Philippines. He was honorably discharged in January of 1946. Upon entering civilian life David took a position at Nelson Machinery as a machinist for several years. He then accepted a position with the City of Green Bay as a Superintendant in the Sign and Paint Maintenance Division until his retirement in 1980. David was a lifetime member of the V.F.W Nobel-Straubel Post #2037, the American Legion, the Navy Club and also belonged to the Moose Club. He and Beauty built a home away from home cottage on the Menominee River and loved spending time with their family just relaxing. David liked to go fishing, hunting and enjoying the serenity of nature. He liked playing cards especially cribbage and sheepshead. David was an artist in his own accord and was very talented when it came to oil painting, drawing cartoon characters but especially loved to paint bird portraits for Beauty. He was also very crafted when it came to woodworking and carving decoys and other treasures. David liked playing the harmonica and was very intrigued with the latest technical gadgets. He was very proud of his family and cherished the many get-togethers with them. David was a loving husband, father, grandfather, great-grandfather, a friend to many who never knew how to say “no”~ He gave from his and heart and soul. “The twinkle in his eye was always followed by his quick wit and sense of humor. He loved to make us all laugh and nothing brought him more joy than his family.” David is survived by loving wife and biggest supporter Arbutus, two daughters and one son-in-law Bonnie and Kris Khatri, Barbara Tappa, three grandchildren John Tappa and his special friend Jennie Collard, Shelly (Victor) Radart, Terri (Julian) Rodriguez, seven great-grandchildren Kendra Tappa and her fiancé Ben Niemuth, Danny Trudeau, Alexis Jakubowski, Savannah Jakubowski, Tylr Codr, Cassondra Tappa, Olivia Rodriguez, a brother and sister-in-law Richard (Margaret) Blozinski. He is further survived by nieces, nephews other relatives and friends. He was preceded in death by his parents, one brother and sister-in-law Robert (Julie) Blozinski, one sister Virginia Blozinski. Gathering of family and friends will be held from 9:30 A.M. to 11:00 A.M. on Friday, October 26, 2012 at St. Francis Xavier Cathedral. A Mass of Christian Burial will be held at 11:00 A.M. with Rev. John Girotti officiating. Immediately following the Funeral a Military Funeral Honors Service will take place in recognition of his dedication to his country. Entombment at Allouez Chapel Mausoleum. The family would like to offer a special thank-you to Dr. Tim Fagre and Dr. Mazen Al-Khalisy for all of the care and concern. Also, a warm note of appreciation to the staffs of Heartland Hospice and Santa Maria Nursing Home for all of their wonderful support and love shown to him.

David J. Blozinski, 93, Green Bay passed away peacefully at his home on Monday, October 22, 2012. David was born on December 8, 1918 in Rothschild, WI the son of the now late Michael and Celia (Wozniak) Blozinski. On September 20, 1939 he married... View Obituary & Service Information

The family of David Blozinski created this Life Tributes page to make it easy to share your memories.

David J. Blozinski, 93, Green Bay passed away peacefully at his...

Send flowers to the Blozinski family.