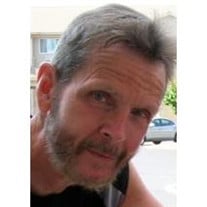 Curtis “Curt” J. Erickson, 58, Green Bay died unexpectedly, on Wednesday, August 26, 2009 at Saint Vincent Hospital. Curt was born on May 20, 1951 in Manitowoc, WI the son of John and Marion (Allen) Erickson. He was very conscientious about our environment and tried to go green, often walking instead of driving. Curt was very active and greatly enjoyed biking, rollerblading and playing tennis. He loved the outdoors and found great splendor in the beauty of simply being outside, especially in the fall of the year. Curt was very fond of his aquarium and took good care of his fish, he even had a fresh water shark and golden severms. He was very active in AA and took great pride in the fact that he was once there but now had the courage, strength and tenacity to walk with and support others. Curt was also a basketball fanatic and to him the best time of the year was March Madness as he would plan his vacation around it. The greatest pride and joy of his life was truly his children- he was a loving and wonderful father to Melissa and Evan. Curtis is survived by his two children Melissa and Evan both at home, his two step children Christopher and Michael, his mother Marion Erickson, five sisters and four brothers-in-law Mary Kaye and Ron Jorsch, Marge and John Nagel, Barbara Erickson and her husband Jason Kincaid, Carol and Dan Penterman, Ann Erickson, two brothers and one sister-in-law Jim Erickson and his friend Diane, Paul and Jenny Erickson. He is further survived by many nieces, nephews other relatives and friends. He was preceded in death by his father John. Gathering of family and friends will be held on Tuesday, September 1, 2009 from 1:00 P.M. to 4:00 P.M. at Saint Willebrord Catholic Church. Funeral Service 4:00 P.M. at the church with Rev. Kenneth J. DeGroot O.Praem officiating. In lieu of flowers a Memorial Fund has been established in Curt’s name. The family would like to offer a warm note of appreciation to the caring person(s) who called the Ambulance to respond to assist Curt- your act of kindness, although anonymous will never be forgotten. Dad: Your time with us was too short, But the memories you have given us will forever remain in our hearts. We love you and miss you. Melissa & Evan

The family of Curtis "Curt" Erickson created this Life Tributes page to make it easy to share your memories.

Send flowers to the Erickson family.