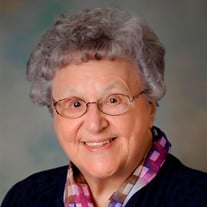 Sister Connie Wavrunek, formerly known as Sister Concepta, age 92, a member of the Sisters of St. Francis of the Holy Cross, died on Tuesday, June 4, 2019, at Bornemann’s Nursing Home. The former Violet Mae Wavrunek was born May 31, 1927, in Antigo, WI, daughter of the late Chris and Barbara (Husnick) Wavrunek. She grew up in Antigo and graduated from Antigo High School. Sister Connie entered St. Francis Convent in 1946, was received as a novice in 1947 and professed her vows in 1949. She celebrated her diamond jubilee as a Religious in 2007 and her 70th anniversary in 2017. In preparation for a teaching and administrative career, she received a Bachelor’s degree from St. Norbert College and a Master’s degree from Clarke College in Dubuque, Iowa. Sister Connie attended Loyola University, Chicago, IL to prepare for her ministry as a Pastoral Associate. Sister Connie served at SS. Peter and Paul, Institute; St. Joseph, Madison; St. John the Baptist, Howard; Holy Cross, Bay Settlement; Holy Trinity, Casco; St. Jude, Green Bay; St. Matthew, Allouez; and Holy Innocents, Manitowoc (now known as St. Francis of Assisi Parish). Since 2009 she served in Community service at the Motherhouse. Sister Connie is survived by the Sisters and Associates of the Sisters of St. Francis of the Holy Cross, nieces and nephews, grand nieces and nephews, other relatives and friends. She was preceded in death by her parents, brothers Raymond and Edwin and sisters, Agnes (Joseph) Krzysiak, Dorothy (Harvey) Habert, Gladys Wavrunek, and Marie Urban. Friends may call at St. Francis Convent, 3110 Nicolet Drive, Green Bay on Friday, June 7, at 4:00pm for the Reception of the Body and Visitation. The Vigil Service will be at 6:30 pm. Visitation for Sr. Connie will continue on Saturday, June 8, at Holy Cross Church, 3009 Bay Settlement Road, from 9:00am until the Funeral Mass at 10:00am. Burial will be in the convent cemetery. The Sisters of St. Francis and the family of Sister Connie wish to express their gratitude to the staff at Bornemann’s Nursing Home for their loving care and support. Hansen Family Funeral Home, Green Bay, is in charge of funeral arrangements.

The family of Sister Concepta "Connie" Wavrunek created this Life Tributes page to make it easy to share your memories.

Send flowers to the Wavrunek family.