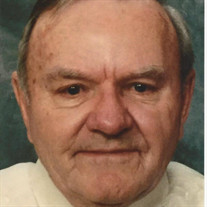 Cletus Edward Kaster, 89, Green Bay passed away peacefully on Tuesday, June 21, 2016 surrounded by his loving family at Aurora BayCare Medical Center. Cletus was born on August 15, 1926 in Green Bay the son of the now late Alphonse and Margaret (Hettig) Kaster. After his graduation from high school he enlisted in the Coast Guard and the United States Navy serving for over 15 years. He re-enlisted in the United States Navy in 1964 until his honorable discharge in 1970. Cletus served during WW II, The Korean War and during the Vietnam War. He graduated from the Community College with a 2 year degree in accounting of which he utilized during his Naval career. In his later years he worked for Purolator Courier Delivery until his retirement. On November 11, 1970 he married Andrea Kaster in Green Bay and the couple enjoyed over 26 years together. Andrea preceded him in death on January 10, 1997. Cletus had many interests in life and always lived life to the fullest. He loved to bowl and belonged to numerous bowling leagues and even bowled with his granddaughter. Cletus enjoyed travelling allover but greatly enjoyed the trips to Minnesota to visit family. He liked spending time outdoors fishing. Cletus enjoyed going to amusement parks and was fond of going to Bay Beach with his family. He also was up for a good game of cards whether it be cribbage or canasta as well as going out to eat. Cletus was a member of the Knights of Columbus #10243 Msgr. Borusky Council. Cletus is survived by his children Bernadeth Kaster, Elmesa Kaster and her fiance’ Gary Hendricks and Randy Kaster, 2 grandchildren Courtney Hock and Riley Kaster, 2 sisters Cleo Peksa, JoAnne Krieger and her partner Robert Woodford, 2 brothers and 2 sisters-in-law Clayton and Clara Kaster, Dean and Julie Kaster, 1 step sister-in—law Joan Arves, a special niece Margaret Kaster and his faithful dog Charlie. He is further survived by other numerous nieces, nephews other relatives and friends. He was preceded in death by his step-mother Aileen Kaster, and one step brother Chaney Arves. Gathering of family and friends will be held from 9:00 A.M. to 10:30 A.M. on Friday, June 24, 2016 at Saint Bernard Catholic Church 2040 Hillside Lane. A Mass of Christian Burial will be held at 10:30 A.M. with Rev. Mark VanderSteeg officiating. In honor of Cletus’s dedication to his Country, Military Funeral Honors will be held immediately following the service. Entombment at Allouez Chapel Mausoeum In lieu of other expressions of sympathy a Memorial Fund has been established in his name. The family would like to offer a warm note of appreciation to the staffs of Aurora BayCare Medical Center especially the Medical Surgical Unit for all of their loving care and compassion~ your kindness will never be forgotten.

The family of Mr. Cletus Edward Kaster created this Life Tributes page to make it easy to share your memories.

Send flowers to the Kaster family.