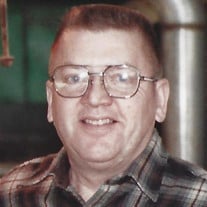 Clarence J. Leiterman, 91, Green Bay formerly of Denmark, passed away on Thursday, September 27, 2018 at Aurora BayCare Medical Center with his family by his side and joined his beloved wife Doris in Heaven. Clarence was born on April 25, 1927 in Green Bay, the son of the now late Joseph and Helen (Opichka) Leiterman. On June 18, 1949, he married the former Doris Klarkowski at SS. Cyril & Methodius Catholic Church in Poland and the couple celebrated 48 years together. Doris preceded him in death in 1997. Clarence was raised on the family farm and in his early years he worked on the farm to help his family. He was a millworker at the former James River Paper Mill, now Georgia Pacific for over 36 years until his retirement in 1992. Clarence loved Polka Music and always enjoyed listening and dancing with Doris. He took great pride in his yard and considered himself the unofficial “branch manager” of his yard, as he could occasionally be found planting, trimming and taking care of his garden and flowers. Clarence had a giving spirit and always kept his eyes open to help his family and others with whatever they needed. He had a passion for automobiles and frequently came home with new cars, much to his families surprise. Clarence was an avid Packer and Brewer fan and enjoyed being able to spend time engrossed in the games~ if they were winning that is! He had a huge heart and was a good and faithful servant and when God called him home~ he answered it willingly. Clarence was a loving husband, father, grandfather, great-grandfather, great-great-grandfather, a friend to many and will always be lovingly remembered and sorrowfully missed. Clarence is survived by his children: Carol (Ronald) Jacques, New Franken; Thomas Leiterman, Green Bay; Judy (Myron) Mertens, Green Bay; Kathy (Bruce) Balza, Pulaski; Sheri (John) McGlone, Lawrence; Patrick Leiterman, Green Bay; David Leiterman, De Pere; 14 grandchildren, 23 great-grandchildren, 1 great-great-grandchild, 3 sisters-in-law: Audrey Klarkowski, Violet Klarkowski and Janice Klarkowski. He is further survived by nieces, nephews other relatives and friends. He was preceded in death by 2 sons: Gary and Nicholas, 1 daughter-in-law: Pauline Leiterman, 5 brothers-in-law and 2 sisters-in-law: Leonard Klarkowski, Emil (Theresa) Klarkowski, Elmer Klarkowski, Norman (Gloria) Klarkowski and Edward Klarkowski. Gathering of family and friends will be held from 9:30 A.M. to 11:00 A.M. on Thursday, October 4, 2018 at Saint Bernard Catholic Church, 2040 Hillside Lane. A Mass of Christian Burial will be held at 11:00 A.M. with Rev. Mark VanderSteeg officiating. Entombment at Allouez Chapel Mauseoleum. In lieu of flowers and other expressions of sympathy, a Memorial Fund has been established in his name. The family would like to extend a warm note of appreciation to the staffs of Allouez Parkside Village, for all of their loving care and devotion. Also, a thank you to Heartland Hospice and Aurora BayCare Medical Center, for the wonderful attention shown to Dad~ your kindness will never be forgotten. Lastly, a special acknowledgement to his good friend Art at Parkside, whom he shared good memories with and lots of laughs.

Clarence J. Leiterman, 91, Green Bay formerly of Denmark, passed away on Thursday, September 27, 2018 at Aurora BayCare Medical Center with his family by his side and joined his beloved wife Doris in Heaven. Clarence was born on April 25, 1927... View Obituary & Service Information

The family of Mr. Clarence J. Leiterman created this Life Tributes page to make it easy to share your memories.

Send flowers to the Leiterman family.