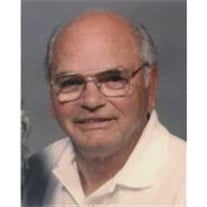 Clarence G. Broberg, 90, Green Bay passed away on Wednesday, November 18, 2009 at his home surrounded by his family. Clarence was born on February 9, 1919 in Calumet, Michigan the son of the now late Arthur and Lucille (Morcum) Broberg. He attended school until the 8th grade when he left to help support his family during the Great Depression, When he turned 18, Clarence joined the Conservation Corps and from there enlisted in the United States Army. He served his country during W.W. II in the European Campaign having fought at Normandy, the Ardenne and various missions in Central Europe. Clarence obtained the rank of corporal and was honorably discharged on July 15, 1945. After separation from the service he moved to Detroit working for the auto industry for a number of years before settling in Green Bay. He secured a position at Larsen Canning Company and met the true love of his life while working with her. On October 15, 1960 he married the former Marjorie Metoxen in Menominee. MI. Clarence worked at First United Presbyterian Church for over 22 years assisting with the building maintenance, and officially retired on July 31, 1986. He loved the outdoors and found great splendor in the beauty of simply being outside. Clarence liked to tinker in his yard, doing lawn care or some maintenance projects. He loved to take Sunday road trips stopping to see relatives and friends along the way~ until it was time to “hit the road”. He is survived by his loving wife Marjorie, his children Lance and Susan Broberg, Green Bay, Bonnie and Terry Van Hout, Green Bay, Susan Webster-Lemens, Green Bay; Gene Stich, Kewaunee; Maxine Thomas, Oneida; Linda Webster, Oneida, Hugh Webster, New Franken and Janice Hanley, Berwyn, ILL; 24 grandchildren, 26 great-grandchildren and 1 great-great-grandson; a sister-in-law Diane Broberg. He is further survived by many nieces, nephews other relatives and friends. He was preceded in death by two brothers and one sister-in-law Richard Broberg, Gordon and Diane Broberg, two sisters and two brothers-in-law Lucille and William Miller, Shirley and Robert Berryman. A Celebration of Clarence’s Life will be held on Saturday, (today) November 21, 2009 from 10:00 A.M. to 1:00 P.M. at the Ravine 2633 Manitowoc Road. A Military Honors Salute will be held at 1:00 P.M. to acknowledge his faithful and honorable service for his dedication to our Nation. Burial will be held at the Oneida Methodist Cemetery. The family would like to offer a special thank-you to the staffs of the Aging and Disability Resource Center for all of their assistance. Also, a warm note of appreciation to the caregivers of Unity Hospice for their loving and attentive care of Clarence.

Clarence G. Broberg, 90, Green Bay passed away on Wednesday, November 18, 2009 at his home surrounded by his family. Clarence was born on February 9, 1919 in Calumet, Michigan the son of the now late Arthur and Lucille (Morcum) Broberg. He attended... View Obituary & Service Information

The family of Clarence Broberg created this Life Tributes page to make it easy to share your memories.

Send flowers to the Broberg family.