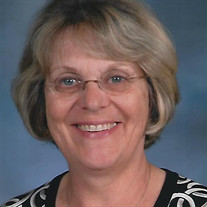 Christine Elizabeth Radliff went to be with her Lord on Friday, December 20, 2919 after an 18 month battle with cancer. Chris was born on March 16, 1950 at Grandview Hospital near Ironwood, Michigan, the daughter of John and Eileen Reardon of Hurley, Wisconsin. Chris graduated from Hurley High School in 1968 and then went on to college at the University of Wisconsin campus in Wausau that fall. While there, in the spring of 1969, she met Allen Radliff who would later become her husband. Chris continued her education at University of Wisconsin- Milwaukee, while Al attended the University in Madison. They made ample use of the Badger Bus line between Madison and Milwaukee on the weekends. Chris graduated with a teaching degree in May of 1972. After they were married in August of 1972, Chris and Al lived in Madison where Al was finishing his civil engineering degree at the University of Wisconsin. In January of 1973, Al took a job with the Federal Highway Administration. Over the next 37 years, they traveled to several job assignments throughout the U.S. Chris had several teaching opportunities in various locations where they lived, but her main vocation was to be a great mother to her three sons. In 2007, they had the opportunity to move back to the Madison area. Al retired in January 2010 and in 2014, Chris and Al decided to move to Green Bay, where they became members at Hope Lutheran Church in De Pere. Chris was a creative lady of many talents. She enjoyed quilting, floral arranging, and crafting with her grandchildren. She was an active member at Hope, a member of its Choir and of LWML Lutheran Women in Mission. Dedication to church, wherever they lived, was a lifelong commitment. Chris’ zest for life was evident in her warm smile and a laugh which started in her toes and resonated throughout the room. Time spent with her grandchildren was her joy as she entertained them with games and fun-filled activities. She had a true love and appreciation of nature as she enjoyed traveling, camping, kayaking and fly fishing. Her positive attitude and genuine nature warmed the hearts of those she met. Dedication to church, family and the welfare of others was foremost in her life and she served them with sincerity and love. Chris is survived by her husband Al; three sons- Russell (Cory) of Missoula, MT; John (Lindsay) of Gardner, KS; and Andrew (Davona) of Laramie, WY; four grandchildren- Kenadi, Makenna, Jovie, and Lucy; her sister Pat Hochstein, of Green Bay; sister-in-law Marilyn Reardon, of Ironwood, MI; aunt Marilyn Skwor, Memphis, TN; and several cousins, nieces, and nephews. Preceding her in death were her parents, John and Eileen Reardon, and her brother Jack Reardon. The family would like to say thank you to the doctors, nurses, and support staff at Aurora Medical Center and Aurora at Home/Hospice for the excellent treatment and support they have given. Gathering of family and friends will be held from 9:00 A.M. to 11:00 A.M. on Friday, January 3, 2020 at Hope Lutheran Church, 700 S. Superior Street, De Pere. A Funeral Service will be held at 11:00 A.M. with Pastor Matthew Baye officiating. In lieu of flowers, memorials are suggested to be given to the American Cancer Society.

Christine Elizabeth Radliff went to be with her Lord on Friday, December 20, 2919 after an 18 month battle with cancer. Chris was born on March 16, 1950 at Grandview Hospital near Ironwood, Michigan, the daughter of John and Eileen Reardon... View Obituary & Service Information

The family of Mrs. Christine "Chris" E. Radliff created this Life Tributes page to make it easy to share your memories.

Christine Elizabeth Radliff went to be with her Lord on Friday,...

Send flowers to the Radliff family.