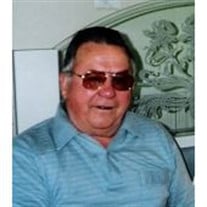 Chester “Chet” S. Klarkowski, 87, Green Bay passed away on Sunday, February 14, 2010 at Woodside Lutheran Home. Chet was born on March 24, 1922 in Green Bay the son of the late John and Anastasia (Buyarski) Klarkowski. He was a graduate of East High School with the class of 1941. Chet served his country during W.W. II in the Army AirCorp until his honorable discharge in 1946. On June 23, 1951 he married the former Jacqueline Milbach. She preceded him in death in August of 1967. Chester then met Phyllis Vercauteren and the two were married on December 13, 1968. He worked in construction as a carpenter all of his life and retired from Lunda Construction Company. After retirement Chester and Phyllis decided to move to Rost Lake, WI to make a new home and enjoy their time together. They moved back to Green Bay 4 years ago to be closer to their family. Chet was very handy in building and repairing things around the house and always had a tube of caulk ready to be put to use. He especially liked to putz around the house and enjoyed being able to take his time on various projects. Chet was a novice chef and found great joy in cooking especially making his famous chicken booyah. He liked his time away on vacation and enjoyed travelling with Phyllis. Chet was a very sociable and outgoing person and loved to host get-togethers for his family, friends and neighbors. He was an avid Packer fan and loved to tailgate and get ready for the games. Chet was a loving husband, a good father and grandfather, a friend to many and will always be lovingly remembered and sorrowfully missed. Chester is survived by his wife Phyllis, his children and their spouses Rick (Mary) Vercauteren, Don (Diane) Klarkowski, Darrell Klarkowski, Vicki (Corry) Collins, Donna (Rick) Nelson, Dave (Wendy) Vercauteren, Tom(Barb) Vercauteren, David (Laura) Klarkowski, Debbie (Kevin) Roffers, Peter Klarkowski, Mary (Dale) Flavion, 14 grandchildren David (Kelli) Klarkowski, Kristie Van DeYacht and her special friend Jessie Dequaine, Brian Klarkowski, Jesse (Jodie) Vercauteren, Tim(Jenny) Vercauteren, Jacqie (Kyle) Will, Shannon (Don) Ryerson, Kimberly (Kyle) Wanner, Sara Vercauteren and her special friend Dan Newkirk, Andy Klarkowski, Jamie Roffers Shane Vercauteren, Amanda Flavion, Cody Flavion, 10 great-grandchildren Alex, Brady, Haylea, Aidan, Kaitlyn, Cailyn, Willow, Austin, Sophia and Wyatt, 2 sisters Frances Petri, Beatrice Dimmer, one brother and two sisters-in-law Norbert (Lorraine) Klarkowski, Ann Klarkowski, 3 sisters-in-law and 1 brother-in-law Marcella Meeuwsen, Jane Younk, Sandy ( George) Borchardt. He is further survived by nieces, nephews other relatives and friends. He was preceded in death by his parents, 1 son-in-law Larry Peeters, 2 sisters and brothers-in-law Regina ‘Jean” (Wallace) Schwartz, Pauline (Don) Adee, 4 brothers and 3 sisters-in-law Ambrose (Helen) Klarkowski, Bernard Klarkowski, John (Mary) Klarkowski, Felix (Grace) Klarkowski, 3 brothers-in-law and one sister-in-law Reuben Petri, Cyril ‘Bud” (Norma) Ullmer, Jim Younk, Gathering of family and friends will be held on Thursday, February 18, 2010 from 4:00 P.M. to 6:00 P.M. at Nativity of Our Lord Parish 2270 S. Oneida Street. Mass of Christian Burial 6:00 P.M. at the church with Rev. John Becker officiating. Burial at Allouez Catholic Cemetery. In lieu of flowers a memorial fund has been established. The family would like to offer a special thank-you to the staffs of Unity Hospice, Woodside Manor and Woodside Special Care Unit for all of their love and special attention.

The family of Chester "Chet" Klarkowski created this Life Tributes page to make it easy to share your memories.

Send flowers to the Klarkowski family.