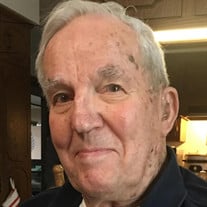 Charles “Charlie” H. Tilot Jr, 93, of Green Bay was called home to our heavenly father with his family by his side on September 23, 2020. Charles was born on April 24, 1927 in Green Bay to the late Charles and Anna (Gillis) Tilot. On August 8th, 1952 he married Geraldine B. Kaminski @ Holy Martyrs of Gorkum Church. Charlie is survived by his daughter Catherine (William) Ruben, his son Michael (Cathy) Tilot, 3 grandchildren Janette (Jeff) Jorgensen, Alex & his fiancé Aleah Torborg & Meghan Tilot, 3 great grandchildren Caleb (Jessica) Jorgensen, Samuel Jorgensen and Madilyn Jorgensen. He is further survived by his sister Arletta LaHue and his brother Robert (Darlene) Tilot, his sister in-laws Irene and Armella Tilot. He is further survived by nieces, nephews, other relatives, and friends. He was preceded by the love of his life and wife, Geraldine B. (Kaminski) Tilot of 62 years. He was proceeded in death by an infant son Daniel and an infant daughter Mary. He was preceded in death by his brothers Vernon (Betty) Tilot, Richard Tilot, Donald Tilot Sr., brother-in-law Lee LaHue, and sister Verna (Owen) Saidon. Dad loved to spend time at his cottage in Little Sturgeon. He enjoyed fishing, bon-fires, playing cards “Sheep Head”, “Poker” and “Gin”. Dad had a knack for making his cottage a home for family and friends to gather often. Dad will be remembered by his great lessons of life, simplicity, hard work ethic, faith, and a true meaning of family. Dad had an enormous and unconditional love for his family, especially his grandchildren. The # of sleeps at the cottage, crabbing and fishing time with grandpa were just a few of his favorites that were important to him. He enjoyed the Brew Crew and the Green Bay Packers along with his Friday fish fry’s. We will miss dads distinctive “Old Fashioneds” and “Manhattan’s”. Dad will be remembered as the “House to House” milk man, and semi-driver for Fairmont Foods where he worked for 35 years. Dad was a proud veteran of the United States Army and served during WWII. Charles “Charlie” H. Tilot Jr, 93, of Green Bay was called home to our heavenly father with his family by his side on September 23, 2020. Gathering of family and friends will be held from 9:00 A.M. to 11:00 A.M. on Friday, October 2, 2020 at St. Philip the Apostle Catholic Church, 312 Victoria Street. A Mass of Christian Burial will be held at 11:00 A.M. with Rev. Bill Hoffman officiating. Burial at SS Cyril & Methodius Catholic Cemetery, Eaton. A sincere Thank You to Dr. Paul Schmidt, Heartland Hospice, Bellevue Senior Community (Renee and Tammy), Allouez Parkside (Mary, Debbie, Janelle). Thank you for the wonderful care you gave our father.

The family of Mr. Charles H. Tilot created this Life Tributes page to make it easy to share your memories.

Send flowers to the Tilot family.