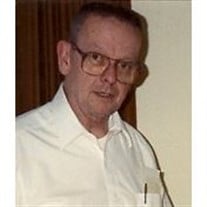 O’Brien, Charles “Chuck” Chuck O’Brien, 79, Green Bay, died Friday, September 7, 2012. Chuck was born on November 23, 1932 in Kaukauna, Wisconsin to Patrick and Bernadette (Marinan) O’Brien. He graduated from East High School in Green Bay with the class of 1951. He enlisted in the U.S. Army in July of 1953 and served in the Grave Registration Department until his honorable discharge in June of 1955. He married his high school sweetheart, Carol Geyer, on August 20, 1955. He and Carol then moved to Chicago where Chuck completed his degree in Mortuary Science. After graduation he accepted a job at Pflanz Funeral Home in Portage, Wisconsin. Chuck worked at numerous funeral homes before having the opportunity to purchase Coad Funeral Home here in Green Bay. He then acquired an interest in Findeisen-Greiser Funeral Home, which then became O’Brien, Greiser & Coad Funeral Homes. Coad was later sold and he acquired the remaining interest in Findeisen-Greiser. Chuck was a dedicated funeral director who always served his families to the best of his ability. He was very sensitive to other’s needs, especially their financial situations. He had a big heart, a strong work ethic and was never afraid to roll up his sleeves. Chuck also served the needs within the Jewish and Hmong communities. As he reached the age of retirement he sold his funeral home to Schauer & Schumacher, staying on to help them as well as Hansen Funeral Services and was always willing to reach out to other funeral directors if they needed his assistance. Chuck was a very active member of the Green Bay Lions Club as well as the Knights of Columbus. He loved his weekly card games, one of his greatest pleasures, as well as grilling out and keeping a meticulous yard. He enjoyed planting and caring for his flower garden. He was a big Packers fan, owning stock in the team, and loved playing in his football pool. He also got great pleasure from going out to eat, meeting his friends at 6:00 every morning for coffee and lunch on Wednesdays at the Allouez Café. He loved taking his daughter Tracy out to breakfast every Sunday. Chuck is survived by his wife, Carol, his daughters Kathryn and Theresa Ann (Tracy), his grandchildren Kyla and Ian Tully, his sisters Fern Engebos and Eileen Engebos, two sisters-in-law Shirley Geyer and Gertrude O’Brien, nieces, nephews, other relatives and many, many good friends. He was preceded in death by his son Dennis and his daughter Maureen, his parents and his brother Pat O’Brien and his two brothers-in-law Bob Engebos and Jim Engebos. To celebrate Chuck’s life, a gathering of family and friends will be held from 12:00 P.M. to 3:00 P.M. today, Wednesday, September 12, 2012 at St. Agnes Parish, 1484 9th St. A Mass of Christian Burial will be held at 3:00 P.M. with Rev. Patrick Beno officiating. Burial will be at Allouez Catholic Cemetery.

The family of Charles O'Brien created this Life Tributes page to make it easy to share your memories.

Send flowers to the O'Brien family.