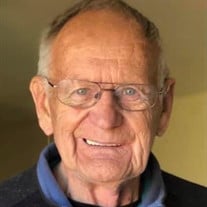 Charles “Chuck” Henry Nelson, 81, Allouez, passed away at home surrounded by family on Saturday, March 6, 2021 due to complications of dementia. Chuck was born August 15, 1939, the favorite son of Henry and Elsie Nelson in Chicago before moving to New Lisbon, WI. After high school graduation, he served in the United States Navy on the USS Hancock and USS Kitty Hawk. After his honorable service, he met his wife, Mary Jo (McKewin) Nelson. They married April 24,1965 and moved to Green Bay where they raised two daughters: Terri (Frank) Hanold and Tammi (Kurt) Rozek. He owned and operated Able Sewer Service until his retirement. Chuck needed to stay busy so he decided to do fun jobs in retirement such as delivering pizza for his daughter at Happy Joe’s, being a courier for Nicolet Bank and Bay Title along with others, he just loved socializing and meeting new people. Chuck enjoyed a game of cards or cribbage, bowling, golf and was a member of the Baylander Barbershop Chorus for over 33 years. He is survived by his children and grandchildren: Tayler (Alex) Windjue, Trevor, Trisha, Tessa and Trina Hanold. He was always supporting them by attending their activities. He is also survived by siblings: Marilyn Schlosser, Linda (Eddie) Davis, Christine (Rip) O’Dwanny, brother-in-law: Harlan Plumb, sister-in-law: Cherie Baker, nieces, nephews and his sweet dog Nora. He was preceded in death by his parents, his sister: Ellie Plumb, in-laws: Byron and Marion McKewin, brother-in-laws: Bill Baker (golf buddy) and Jack Schlosser, many friends and beloved pets who will be excited to reunite with Chuck in Heaven. He always had a happy-go-lucky attitude and whistled while he worked. We appreciate family and friends (especially dear neighbors) who helped during his most-challenging moments. We will greatly miss him but take comfort in knowing his suffering is over, and he is at peace. Due to Covid-19, a private family celebration will be held. In lieu of flowers, a donation can be made to a local animal shelter or a charity of your choice, in Chuck's name.

Charles &#8220;Chuck&#8221; Henry Nelson, 81, Allouez, passed away at home surrounded by family on Saturday, March 6, 2021 due to complications of dementia. Chuck was born August 15, 1939, the favorite son of Henry and Elsie Nelson in Chicago... View Obituary & Service Information

The family of Mr. Charles "Chuck" ` H. Nelson created this Life Tributes page to make it easy to share your memories.

Send flowers to the Nelson family.