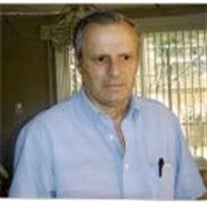 Charles O. Burkel, loving husband, father of two sons passed away peacefully in his home on Tuesday, October 28, 2008 at the age of 63. Charles was born on March 18, 1945 in Green Bay the son of the late Everett and Mabel (Zastrow) Burkel. After graduating from East High School, he enlisted and served his country in the United States Army from 1963 until his honorable discharge in 1967. On June 1, 1968 Chuck married the love of his life Kay LeCloux. Chuck was employed at Georgia-Pacific Paper Mill for over 42 years as a supervisor. After his retirement, Chuck loved keeping busy by doing odd jobs for the elderly. He also loved going to their trailer to fish and watch the Packer Games. Chuck also cherished the many trips to Branson with family and friends on vacation. He liked to play cards and slots at the casino. Chuck always loved supporting, protecting and providing for his family, especially his wife and two sons. He had two special children in his life Max and Jada Wagner that he loved doing things with. Chuck is survived by his loving wife Kay, two sons Chuck Burkel, Chad Burkel and his special friend Jodi, four sisters and five brothers-in-law Jean and Larry Goral, Joan and Bud Weber, Patti and Herbie Brown, Wendy and Dick Faye, Gary Mettler, three brothers and four sisters-in-law Robert and Donna Burkel, Gerald and Carol Burkel, James and Phillis Burkel, Shirley Burkel. He is further survived by nieces, nephews other relatives and friends. He was preceded in death by one sister Mary Mettler and two brothers Ronald Burkel, Daniel Burkel. Gathering of family and friends will be held on Friday, October 31, 2008 from 9:00 A.M. to 11:00 A.M. at Green Bay Community Church 600 Cardinal Lane. Funeral Service 11:00 A.M. in the Chapel of the church with Pastor Kim Sechler officiating. Entombment at Allouez Chapel Mausoleum. The family would like to extend a special thank-you to Dr. Michael Volk and Dr. Jerry Winkler for all of their special care. Also, a warm note of appreciation to the staffs of Green Bay Oncology at St. Vincent Hospital and Unity Hospice for all of the loving care and concern.

Charles O. Burkel, loving husband, father of two sons passed away peacefully in his home on Tuesday, October 28, 2008 at the age of 63. Charles was born on March 18, 1945 in Green Bay the son of the late Everett and Mabel (Zastrow) Burkel. After... View Obituary & Service Information

The family of Charles O. Burkel created this Life Tributes page to make it easy to share your memories.

Send flowers to the Burkel family.