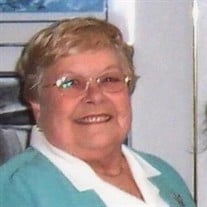 Catherine Anne Marie “Cathy” (Fonder) Jacisin, 83, of Green Bay, Wisconsin, passed away on February 22nd, 2019, surrounded by family. She was born December 5, 1935, in Walhain, WI, in her grandparents' house, to parents Raymond and Lucille (Jandrain) Fonder. The family moved to Suamico, then to North Chase to a dairy farm. Cathy then moved to Long Beach, CA (by way of Missouri and Arizona), then to San Bernardino, CA, Dyckesville, WI, West De Pere and then Allouez. On February 13, 1961, she married Michael Henry Jacisin of Ironwood, MI, in Long Beach, CA. When she was 8 years old, Cathy's father taught her to drive a team of horses to bring in the hay. Her love of travel and driving across the country (stopping to see and learn about everything she could) came to define much of her later life, along with a great appreciation for reading, visiting museums, people-watching, and enjoying English mysteries in movies and on television. While Cathy loved the Four Corners area of the American Southwest in particular, one of her fondest memories was of driving through the California mountains on September 11, 2001, seeing the American flag flying on all the semis passing by along the way. She served as PTA president for St. Louis School in Dyckesville while her children attended and was very active in the Boy Scouts while her husband was a Scout leader and her sons participated. She worked for Bank of America (Long Beach, CA), Kellogg Bank (Scott, WI), Northbrook Country Club (Luxemburg, WI) and Peterson Builders (Sturgeon Bay, WI) over the years. Cathy’s greatest happiness came always from her relationships with family and friends. She maintained a special place in her heart for her best friend, Jane Neverman, and her husband, Gus. She loved talking to people and hearing their stories and devoted herself to caring for her husband when he fell ill toward the end of his life. Despite many challenges, she maintained a positive outlook on life all the way. Cathy is survived by children Jennifer Wardlow (Dave Zarling), Chris Jacisin & his wife, Ann Barlament, and Eric Jacisin (Sue Premo); grandchildren Hayley Barlament, Reilly Jacisin, Jonathan Wardlow (Ryan Inkel) and Taylor Wardlow; sister Sharon Marks (Leland); brother-in-law Lloyd Hill; sisters-in-law Katherine Fonder and Penny Jacisin; and many nieces and nephews whose love brought her immeasurable joy every day. She was preceded in death by husband Michael; sisters Evelyn Micolichek, Dorothy Dahlke, and Mary Fonder; brother Lambert Fonder; brothers-in-law Ken Dahlke, Jack Jacisin and Robert Micolichek; and sister-in-law Marilyn Hill. Gathering of family and friends will be held from 10:00 A.M. to 12:00 P.M. on Saturday, March 2, 2019 at the Swan Club, 875 Heritage Road, De Pere. A Memorial Service will be held at 12:00 P.M. (noon) with Pastor Bob Gustophson officiating, followed by a time of sharing of memories. The family wishes to express special thanks to Dr. Luke Warpinski and his staff at Aurora, who provided Cathy with great comfort and care in the closing weeks and months of her life; Linne Baenen, who took such good care of Cathy and became an important part of her life, and also the devoted staff at Allouez Parkside Village, who did a wonderful job of caring for Cathy and making her feel at home in her final months.

The family of Mrs. Catherine (Cathy) Jacisin created this Life Tributes page to make it easy to share your memories.

Send flowers to the Jacisin family.