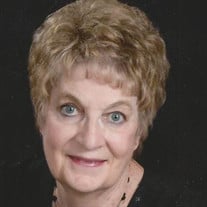 Carolyn “Carol” M. Bero, 67, Ashwaubenon, was reunited with her husband in Heaven after her second courageous battle with cancer on Wednesday, April 15, 2015 surrounded by her loving family. Carolyn was born on April 26, 1947 in Green Bay the daughter of the late Norman and Rita (Romuald) Leurquin. On October 15, 1966 she married Charles “Chuck” Bero, Jr. at St. Jude Catholic Church and the couple enjoyed 40 wonderful years together. Chuck preceded her in death on April 21, 2007. Carol was employed at Kmart as an office manager for over 25 years. After leaving Kmart she took a position at KI and formally retired in 2011 to spend more time with her family. Carol loved her family and cherished each moment with them. She especially enjoyed being the greatest fan at her grandchildren’s many events. She enjoyed traveling to many destinations across the country, but no destinations were more precious than Lake Village, Arkansas and her cottage in Silver Cliff, Wisconsin. She also had a love for Gulf Shores, Alabama and her annual Hodag trip. She loved using her natural creativity to make homemade cards, ceramic projects and homemade Christmas gifts for her family and friends. Carol was a loving wife, mother, grandmother, sister and a friend to many. She will be lovingly remembered and deeply missed. Carol is survived by her four daughters and sons-in-law Carrie and Rusty Johnson, Lake Village, AR; Kelly and Jim Vander Linden, Bellevue; Tracy and Chris Elliott, DePere; Brenda and James Trudell, DePere; 13 grandchildren Alyssa, Miranda and Mason Johnson, Connor, Kaitlyn and Evan Vander Linden, Lauren, Megan, Carson, Aiden and Owen Elliott, Savannah and Dalton Trudell, her special pet Holly, 1 sister and brother-in-law Lori and Andy Kurowski, 3 brothers and 3 sisters-in-law Al and Alice Leurquin, Brian and Arlena Leurquin, John and Tammy Leurquin, an Aunt and Uncle Yvonne (Bob) Coppens. Her brothers-in-law and sisters-in-law Jim (Mitzi) Bero, Vernon Bero and Barb, Donna VanEgren, Jerry (Jan) Bero, Bill (Marge) Bero, Shirley (Charlie) Drace, Gary (Sue) Bero and Pat Bero. She is further survived by many nieces and nephews, Kim, Kevin, Ryan, Kiara, Marisa, Kelsie, Amanda, Khristina, Taylor, Danielle, Jeff, Scott, Mark, Josh, Amanda, Mike as well as other relatives and friends. She was preceded in death by her husband Chuck, her parents, an infant brother and sister, her mother-in-law and father-in-law, her sisters-in-law and brothers-in-law. She was further predeceased by aunts, uncles other relatives and friends. Gathering of family and friends will be held from 4:00 P.M. to 7:00 P.M. on Sunday, April 19, 2015 at Nativity of Our Lord Catholic Church 2270 S. Oneida Street. A Parish Wake Service will be held at 7:00 P.M. Visitation will continue after 2:00 P.M. on Monday, April 20, 2015 at the church. A Mass of Christian Burial will be held at 3:00 P.M. with Rev. Jack Harper officiating. Entombment will be next to Chuck at the Shrine of the Good Shepherd Chapel Mausoleum. In lieu of flowers a Memorial Fund has been established in her name. The family would like to offer a warm note of appreciation to Bellin Hospital 4th floor Staff and The Cancer Team Bellin Health for their wonderful care and compassion. Also, a heartfelt thank-you to the Staffs of Unity Hospice and Ashwaubenon Public Safety for their loving attention shown to our Mom~ your kindness will never be forgotten. Mom’s journey was also blessed by the many family and friends who were with her along the way. Mom, your memory will live on in our hearts forever.

Carolyn &#8220;Carol&#8221; M. Bero, 67, Ashwaubenon, was reunited with her husband in Heaven after her second courageous battle with cancer on Wednesday, April 15, 2015 surrounded by her loving family. Carolyn was born on April 26, 1947 in... View Obituary & Service Information

The family of Mrs. Carolyn Mary Bero created this Life Tributes page to make it easy to share your memories.

Send flowers to the Bero family.