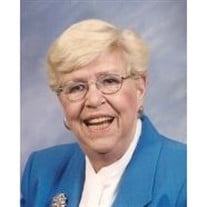 Carol Buffington, 82, Green Bay passed away on Thursday, June 27, 2013 at Odd Fellow Rebekah Nursing Home. Carol was born on December 5, 1930 in Marshfield, WI the daughter of the now late George and Nora (Rondorf) Buffington. She worked as a bookkeeper throughout most of her professional career. Carol’s greatest passion and joy however was her volunteer work, she devoted her time in the assistance of others~ no matter the cause. If it was important to someone else then it was near to Carol’s heart to lend a hand. Carol is survived by one daughter-in-law Sue Rector, 3 grandchildren Tanya (Chris) Host, Scott Rector, Jill Rector, 8 great-grandchildren, 1 brother and 3 sisters-in-law Bill and Peggy Buffington, Shirley Buffington, Breezie Buffington. She is further survived by nieces, nephews other relatives and friends. She was preceded in death 1 son Larry Rector, 2 sisters Delores and Mary, 6 brothers, George, Donald, Jim, Jerry, Jack and Roger. Gathering of family and friends will be held from 9:00 A.M. to 10:30 A.M. on Saturday, July 13, 2013 at Saint John The Baptist Catholic Church 2597 Glendale Avenue, Howard. A Memorial Mass will be held at 10:30 A.M. with Rev. John Bergstadt officiating. The family would like to offer a warm note of appreciation to the staffs of Odd Fellow Rebekah for all of the wonderful care and compassion shown to Carol. Also, a special thank-you to the staffs of Hospice Advantage for their kindness.

The family of Carol Buffington created this Life Tributes page to make it easy to share your memories.

Send flowers to the Buffington family.