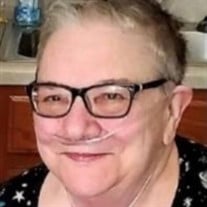 I, Camille Nadeau Rice, aka as Cammie or Cam died on Thursday, February 3, 2022 from lousy lungs of which I take full responsibility. (Being a preemie probably didn’t help). Since I was diagnosed in 1998 with emphysema, I’ve lived a relatively good life. I quit smoking in 2003. I worked out with a wonderful personal trainer who kept me strong physically and emotionally throughout tears and frustration always encouraging me. We continued training after I got on oxygen in 2011. I continued to work at ExxonMobil as well. I retired in December 2011. I moved back to Green Bay in August 2012 with my daughter, Bailey. Since moving back to Green Bay 2012, I have reconnected with many grade school, high School and swim team friends. I have also made several new friends. I swam competitively for 11 years at the YMCA. I attended St. Matthew’s grade school and graduated from SJA in 1969, and California Western (San Diego) in 1973 with a Physical Education degree. I worked one year as aquatic director at the Marinette/Menominee YMCA. Moved to Boston in 1974. I worked in the Marriott Hotel first as an employee cafeteria worker followed by being a hostess/cashier, and then the general cashier for the hotel. At that time I got inspired to go into accounting. I moved back to Green Bay in 1977 to take several business and accounting classes after which I passed the CPA exam. In July 1979 I moved to Houston to work for ExxonMobil auditing. I transferred to Carlinville, Illinois in 1980 to be mine accountant where I met Bob Rice. We married in 1983. In 1984 we got transferred back to Houston. In 1985 and 1986 we had two beautiful children, Dalton and Bailey, respectively. While in Houston I worked in revenue and royalty accounting. I was fortunate enough to take 11 years off while the kids were in school. During those years I tutored several kids, read to classrooms, and was VP of PTO fund raising for several years. I was a co-leader in a girl scout troop for 5 years. In 2001 I went back to work retiring in December 2011. My son Dalton gave me my first grandson, Rylan, in 2010. Bailey had Sebastian in 2013 followed by the birth of Harper Camille in November 2015. In March 2018 Dalton and Anna had twin boys, Ryker and Rhett. I met them in July 2018. Dalton married Anna Paige in December 2015 in Houston. During the last few years, my grandchildren have been the light of my life! We had fun playing on the floor and riding on my scooter. I always looked forward to their visits. I’m also very excited for the arrival of my 5th grandson, Parker Flinchum due in April of 2022. Thank you Bailey and Dalton for being wonderful children. I will always love you! I loved to drive. So I took road trips with my portable concentrator and oxygen tanks. The first trip, February 2012, took me through Louisiana, Alabama, Mississippi, Florida, Georgia, S. Carolina, N. Carolina, Tennessee, and back to Houston visiting people along the way. It was a wonderful trip. My next trip was moving back to Green Bay in August 2012. Bailey and I drove through Oklahoma to visit one of her friends, then on through Missouri up to GB. In February 2013, I drove down to Houston to see my son and grandson. Spent 3 weeks in an extended stay hotel visiting friends and family. I drove to N. Carolina to visit my nieces for a few days and back to GB. My trip in January 2014 was the most eventful drive. I had to get up very early, for me, to leave by 8:30 A.M. so I could beat an ice storm to my next stop, Cape Girado, Mo. I succeeded barely. That’s when I learned I had to ask for help getting my stuff in and out of the car. On the way back from that trip I again was attempting to beat an ice storm I got off in Forrest City Arkansas where I ended up staying 4 nights. I planned a trip to go west in September 2014. I drove through Iowa, Nebraska, Colorado and New Mexico (again visiting friends and family along the way). I learned that in high altitude I had to keep oxygen on 100% of the time. I drove through El Paso on to Houston again to see Dalton and Rylan and friends for a week or so, then drove back to GB. I made one last trip to Houston in January 2015. It was special since Rylan was able to spend one night in the hotel with me. It was great! Looking back on my life, I am grateful for my friends and family. You have made my life complete. I have learned to accept life and be positive. You left me breathless. I love you all! Thank you. I am survived by Dalton, Anna, Rylan, Ryker and Rhett Rice (Morgan’s Point Resort, TX), Bailey , Dustin, Sebastian and Harper Phillips (Green Bay), Bob Rice (Houston), Siblings, Cece Nadeau (New York) and EG Nadeau (Madison) , cousins, as well as several nieces and nephews. I was proceeded in death by my parents Marynelle and George Nadeau and sister, Dennie Nadeau. Gathering of family and friends will be held from 12:00 P.M. to 2:00 P.M. on Friday, March 4, 2022 at Resurrection Catholic Church, 333 Hilltop Drive, Allouez. A Mass of Christian Burial will held at 2:00 P.M. with Rev. Tom Reynebeau officiating. Burial at Allouez Catholic Cemetery. In Lieu of flowers a Memorial Fund has been established. A big thank you to the staff at Bellevue assisted living. I enjoyed your help/visits and friendships!

I, Camille Nadeau Rice, aka as Cammie or Cam died on Thursday, February 3, 2022 from lousy lungs of which I take full responsibility. (Being a preemie probably didn&#8217;t help). Since I was diagnosed in 1998 with emphysema, I&#8217;ve lived... View Obituary & Service Information

The family of Camille E. (Nadeau) Rice created this Life Tributes page to make it easy to share your memories.

I, Camille Nadeau Rice, aka as Cammie or Cam died on Thursday,...