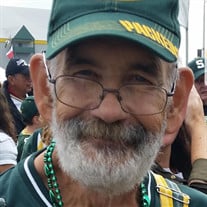 Brian P. Brouchoud, aka Bosco, 67, Mishicot, earned his wings on Sunday, May 5, 2019 surrounded by his adoring family. Brian was born on December 3, 1951, in Two Rivers, the son of the now late Raymond and Joan (LaFond) Brouchoud. He was a graduate of Washington High School in Two Rivers. On February 14, 1976, Bosco married the love of his life Cathy Witcpalek at St. Marks Catholic Church. Not only were they best friends, but they were the ying to each other’s yang for the past 43 years. Bosco was employed at Eck Industries in Manitowoc for over 28 years until he retired early due to his illness. Bosco loved his family and never missed an opportunity to spend time with his wife, children, and grandchildren. He considered himself blessed in so many ways and although he had many interests, family was always number one to him. Additionally, Bosco loved sports and always rooted for the Packers, Brewers, Bucks, and Badgers. His favorite sports to watch though, were the ones his granddaughters were playing in! He was also an avid reader, history buff, and lately found enjoyment watching his favorite TV shows, even his daily soap operas. Bosco loved to spend time outdoors in his gazebo and cherished the memorable times spent camping with his family, especially at Shawano Lake. Bosco is survived by his wife Cathy, his children Mark (Julie) Brouchoud, Kari Brouchoud, Kristin Brouchoud, his 2 bonus kids Caitlyn and Scooter Koller, 2 granddaughters Kasey and Cooper, his fur babies, Boomer, Finnigan, Frank, Sarge, 2 sisters and 1 brother-in-law Bonnie (Frank) Kuhl, Julie Klein, 1 sister-in-law Judy Brouchoud, his mother-in-law Verna Witcpalek, his sisters-in-law and brothers-in-law Diane (Ted) Teddleton, Mary Witcpalek, Rick (Barb) Witcpalek, Mike (Darlene) Witcpalek, Sandy Schleis, Bruce Witcpalek, Laurie (Merle) Stauber. He is further survived by nieces, nephews, great nieces, great nephews, other relatives and friends. He was preceded in death by a brother David Brouchoud, his father-in-law Harold Witcpalek, a brother-in-law Dennis Schleis, nieces Sarah Koller and Wendy Brown, and a nephew Steve Witcpalek. Gathering of family and friends will be held from 2:00 P.M. to 4:00 P.M. on Friday, May 10, 2019, at St. James Parish (Cooperstown) 18228 Cty Road R, Denmark. A Mass of Christian Burial will be held at 4:00 P.M. with Rev. Dennis Ryan Officiating. The family would like to offer a warm note of appreciation to Dr. Kevin Rosteing and nurse Linda of Mercy Family Practice, and his team of doctors at Aurora BayCare for all of the care and compassion shown to Bosco and his family throughout his illness. Additionally, a special thank you to Southern Care Hospice for all of their loving care~ your kindness will never be forgotten.

Brian P. Brouchoud, aka Bosco, 67, Mishicot, earned his wings on Sunday, May 5, 2019 surrounded by his adoring family. Brian was born on December 3, 1951, in Two Rivers, the son of the now late Raymond and Joan (LaFond) Brouchoud. He was... View Obituary & Service Information

The family of Mr. Brian P. Brouchoud created this Life Tributes page to make it easy to share your memories.

Send flowers to the Brouchoud family.