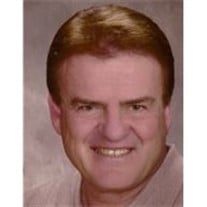 Robert William Pasternak, age 67, of De Pere, passed away unexpectedly March 16, 2014 at his home. He was born November 5, 1946 in East Chicago, Indiana, the son of the late William and Evelyn Pasternak. Bob graduated from Bishop Knoll High School and attended Purdue University. He married Donna Thompson January 24, 1987 and was a lifelong mechanical engineer. Bob loved boating, the Chicago Bears and Cubs, coaching soccer and attending all of Markie’s figure skating events and her other activities. He was a recent Marquette Golden Eagles fan. Being a #1 Dad, he enjoyed all family celebrations and gatherings. Bob is survived by his wife, Donna, his daughter Markie (19 years), and other family members, Irene Kowandy, JoAnne and Don Slepski (Ron and Sue), Sherry and David Sinkula (Dave and Steve), Mary Thompson (Ken and Nick.) He was preceded in death by his parents and Normie, Verna, and Ken Thompson. A gathering of family and friends will be held Thursday, March 20, 2014 from 4 P.M. until 6 P.M. at St. Francis Xavier Catholic Church, 220 S. Michigan Ave., De Pere. Funeral Mass will be held at 6 P.M. with the Reverend Judah Pigon officiating. Burial will be in Nicolet Memorial Gardens . In lieu of flowers a memorial fund will be established.

The family of Bob Pasternak created this Life Tributes page to make it easy to share your memories.

Send flowers to the Pasternak family.