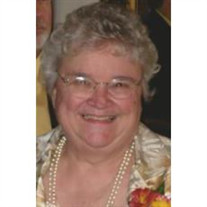 Tassoul, Barbara Ann (Binish), 78, of Green Bay Passed away after a long struggle with dementia and Parkinson’s Disease. She was born on August 24, 1935 to Henry and Catherine Binish. After graduating from West High School in 1953, she worked at Wisconsin Public Service. She married Giles Tassoul on June 16, 1956. As her children were growing up, Barb was a Girl Scout leader for numerous years and an active volunteer at St. Bernard church and school and the Green Bay YMCA swim team. She also worked at St. John the Evangelist as a bookkeeper/secretary for 25 years. Barb was a great crafter and seamstress. She taught her children, grandchildren, and many other young children how to sew, knit, and crochet, and do ceramics. Barb also loved to make porcelain dolls and dress them with handmade clothes. She is survived by her loving and caring husband, Giles, and her four children: Mark, Fort Mill, SC; Karen (David) Scudiero, North Liberty, IA; Diane Cook, Green Bay; and Joan (Paul) Hansen, Green Bay. She is also survived by 11 grandchildren: Philip and Michele Tassoul, Michael Scudiero, Naomi (Ryan) Parrott, Corina (Ivan) Arangure, Adam, Ariel, Kelly, and RJ Cook; Dane and Jolee Hansen and 6 great-grandchildren: Dominik, Harper, Adrian, Adelyn, Caden, and Trenton. Barb is further survived by a sister-in-law, Marge Binish, sisters Carol (Don) Spletter, Jeanne (David) Seitz, Grace (Jim) Boehm, and brother Dick (Mary) Kendall. She was preceded in death by her parents and her brother Robert Binish. Gathering of family and friends will be held from 9:00 A.M. to 11:00 A.M. on Tuesday, June 3, 2014 at St. Bernard Catholic Church 2040 Hillside Lane. A Mass of Christian Burial will be held at 11:00 A.M. with Rev. Doug LeCaptain officiating. Entombment at Allouez Chapel Mausoleum. Heartfelt thanks to Heartland Hospice, NEW Curative, Home Instead, and ManorCare East. We were blessed that our mother had the presence of angels here on earth, especially Michael, Cassie, Kathy, Patty, Abby, and Fr. Doug, and many many more caregivers.

Tassoul, Barbara Ann (Binish), 78, of Green Bay Passed away after a long struggle with dementia and Parkinson&#8217;s Disease. She was born on August 24, 1935 to Henry and Catherine Binish. After graduating from West High School in 1953, she... View Obituary & Service Information

The family of Barbara A. Tassoul created this Life Tributes page to make it easy to share your memories.

Tassoul, Barbara Ann (Binish), 78, of Green Bay Passed away after...

Send flowers to the Tassoul family.