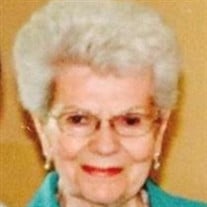 Barbara Jean Smits, 87, passed away on Wednesday, October 21, 2020 at home. Barb was born on June 3, 1933 in Green Bay, the daughter of the now late Philip and Martha (Cleereman) La Plant. She was a graduate of St. Joseph Academy. On June 28, 1952, she married Richard “Dick” J. Smits at Saint Philip the Apostle Catholic Church. Trying to describe all of the wonderful things Barb was interested in would be too numerous to mention, but among some of the ones dear to her heart was her passion for reading, crocheting baby hats and blankets for the grandchildren and hosting the many family get-togethers. Barb and Dick were charter members of St. Bernard Catholic Church and was very active from singing in the choir, a member of the altar society, and volunteering in areas throughout the years. She had a huge heart and enjoyed her volunteer days at Aurora where she met many wonderful people. Barb had an adventurous nature and enjoyed taking rides and travelling with Dick and their family and she always enjoyed the times with Mary Lou and Darrel Lindsley especially their trip out west. Barb was a loving wife, mother, grandma, great-grandma and a friend to many and will always be lovingly remembered and sorrowfully missed. Barb is survived by her loving husband of 68 years: Dick, one daughter and one son-in-law: Julie and Rick Groonwald, Chula Vista, CA; one son and two daughters-in-law: Rob and Mina Smits, Green Bay, Pat Smits, Green Bay, seven grandchildren: Michael Smits, Laura (Derek) LeClaire, Lisa Smits (Mike Maes), Brian (Agnes) Groonwald, Eric (Ann) Groonwald, Kaitlyn (Cale) Tassi, Luke Smits, 11 great-grandchildren, one sister-in-law and brother-in-law: Mary Lou and Darrel Lindsley. She is further survived by a special Uncle: Oran Cleereman, many nieces nephews other relatives and friends. She was preceded in death by one son: David Smits, one granddaughter: Karlee, her mother-in-law and father-in-law: John and Dorothy “Dots” Smits, one brother-in-law and sister-in-law, two sisters-in-law and brothers-in-law. Gathering of family and friends will be held on Wednesday, October 28, 2020 from 9:30 A.M. to 11:00 A.M. at St. Bernard Catholic Church, 2040 Hillside Lane. A Mass of Christian Burial will be held at 11:00 A.M. with Rev. Mark VanderSteeg officiating, Entombment at Shrine of the Good Shepherd Chapel Mausoleum. In lieu of flowers a Memorial Fund been established in her name.

Barbara Jean Smits, 87, passed away on Wednesday, October 21, 2020 at home. Barb was born on June 3, 1933 in Green Bay, the daughter of the now late Philip and Martha (Cleereman) La Plant. She was a graduate of St. Joseph Academy. On June... View Obituary & Service Information

The family of Mrs. Barbara J. Smits created this Life Tributes page to make it easy to share your memories.

Send flowers to the Smits family.