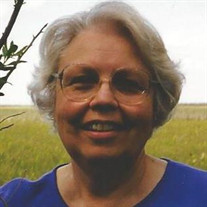 Barbara J. Kane (née Rabe), 82, King, WI, passed away peacefully on Monday, August 3, 2015. She was born in Milwaukee, WI on January 10, 1933, daughter of Gordon and Mildred (Hanson) Rabe. She married Leslie “Leo” J. Kane on September 24, 1955 at Mount Olive Lutheran Church in Suring, WI. Barbara was a 1951 graduate of Suring High School and 1954 graduate of Walther Memorial Hospital School of Nursing. She worked as a Registered Nurse in hospitals and clinics in Chicago, McHenry, Woodstock and Elk Grove Village in Illinois, followed by Oconto Falls and Green Bay in Wisconsin, where in 1997 she retired from Saint Vincent Hospital as a rehabilitation nurse, after 40 years of nursing. She was also co-proprietor of Kane’s Family Shoe Store in Gillett, WI from 1976 - 1982. Volunteer work was a big part of Barbara’s life, and she gave her time and energy with joy. She was a facilitator for the Lupus Support Group of Northeastern Wisconsin, lending an ear at any time of the day to newly diagnosed patients who didn’t know where to turn. Barbara was also a Docent Guide at the Green Bay Botanical Garden, and also lent a hand to neighbors who needed advice on how to turn their gardens into the beauty found in hers. But mostly, her kindness to all will be truly missed. Barbara also loved gardening and getting her hands in the earth. Her favorite garden to work on besides her own was at the Hanson Farm in Maple Valley. She also travelled to many landmark gardens, including Monet’s in Giverny, France, fulfilling a life-long dream. She was also an active member in the Lutheran Women's Missionary League in Green Bay and Sunday school teacher in Suring and Gillett. Barbara is survived by her daughter, Elizabeth, Angers, France; son, Charles and daughter-in-law, Peggy, Waupaca, WI; brother, EJ Rabe and sister-in-law, BJ Douglass, Lakewood, WI; sister, Marlene (Rabe) and brother-in-law, Jim Lathrop, Jackson, WI; step-grandchildren and great-grandchildren, nieces and nephews and very dear cousins. She was preceded in death by her husband, parents, sister-in-law, Catherine, brother-in-law, Edward and his wife Marion, and nephews Patrick, John and Thomas. Gathering of family and friends will be held from 11:30 A.M. to 1:30 P.M. on Sunday, August 9, 2015 at Trinity Lutheran Church in Maple Valley, WI. A Funeral Service will be held at 1:30 P.M. with Chaplain Wayne Schwanke officiating. Burial at Maple Valley Cemetery. In lieu of flowers, donations may be made to the Lupus Foundation of America, Wisconsin Chapter: 414-443-6400 or www.lupus.org.

The family of Mrs. Barbara J. Kane created this Life Tributes page to make it easy to share your memories.

Send flowers to the Kane family.