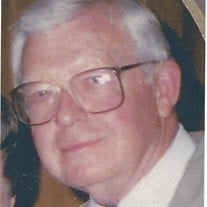 Arthur B. Carlson, 86, Allouez, was reunited with the love of his life Ruth on Tuesday, February 24, 2015. Art was born on March 15, 1928 in Watertown, Wisconsin, the son of the now late Arthur and Katherine (Willers) Carlson. He was a graduate of Wiley High School in Terre Haute, Indiana with the class of 1946. On September 4, 1949, he married Ruth C. Christensen at Bethel Lutheran Church to a standing ovation that was the start of almost 65 years of marriage. Ruth preceded him in death on April 21, 2014. Art enjoyed being Bapa to his 4 grandchildren; and, outside of being a devoted husband and father, he was a wonderful mentor to his family and friends. He was an avid Packer and Badger fan spending hours through the years watching the games. Art was active in sales throughout his working career and was also involved in various advertising and marketing firms on a local and national level. He was extremely social and could always charm people with his sense of humor. Art is survived by his children Steve Carlson, Wheaton, Ill; Deb (Chuck) Faison, Eden Prairie, MN; Connie (Jon) Burggren, Green Bay, 4 grandchildren Danielle and Lydia Faison, Keegan (Amy) Burggren, Britta Burggren, two sisters-in-law Dolores Carlson, Mimi McClure. He is further survived by many nieces, nephews, other relatives and friends. He was preceded in death by 3 brothers and 2 sisters-in-law Marv (Hazel) Carlson, Ken Carlson, Floyd (Eleanor) Carlson, his father-in-law and mother-in-law Rev. Elmer and Rosemary (Morten) Christensen, 2 brothers-in-law and 1 sister-in-law Vince (Adah) Mikkelsen, Roy McClure. Gathering of family and friends will be held from 12:30 P.M. to 2:00 P.M. on Saturday, February 28, 2015 at Grace Lutheran Church 321 S. Madison Street. A Celebration of Art’s life will be held at 2:00 P.M. with Rev. Julie Wrubbel-Lange officiating. In lieu of other expressions of sympathy Memorial Donations may be made to either the Y.M.C.A Youth Program ~or~ to Grace Lutheran Church. The family would like to offer a warm note of appreciation to Unity Hospice especially the staff of the Jack and Engrid Meng Residence. Your kindness and compassion will never be forgotten.

Arthur B. Carlson, 86, Allouez, was reunited with the love of his life Ruth on Tuesday, February 24, 2015. Art was born on March 15, 1928 in Watertown, Wisconsin, the son of the now late Arthur and Katherine (Willers) Carlson. He was a graduate... View Obituary & Service Information

The family of Mr. Art Bernard Carlson created this Life Tributes page to make it easy to share your memories.

Arthur B. Carlson, 86, Allouez, was reunited with the love of...

Send flowers to the Carlson family.