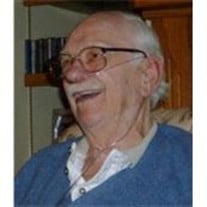 Arno E. Plischke was called home to the peace of his Lord and Savior, Jesus Christ on November 18, 2007. "Arnie" was born to Rev. Walter J. And Minnie (Shultz) Plischke on June 2, 1920 in Westfield, WI. He was raised in Bonduel, WI where his father was Pastor of St. Paul's Lutheran Church. He was the youngest of four brothers: John, Hilbert and Walter Jr. each of whom preceded him in death. As a youngster and young man he loved playing baseball and was a life-long fan. As an accomplished member of the Bonduel tennis team Arnie was encouraged to turn pro. In 1943 he married his sweetheart Eunice D. (Nicky) Nick, and two weeks later was inducted in the United States Army Air Corp. While his first choice was to become a pilot, wartime dictated his becoming a navigator. While on his first mission, Lieutenant Plischke and crew were shot down over German-occupied France. Arnie was helped by the French underground to escape through the Great Pyrenees Mountains, for which he received the Flying Boot Award, an unofficial award and emblem for Escapees & Evadees. After completing his tour of duty he was honorably discharged as a Captain, and then went to business school in Green Bay. Arnie excelled in math and was subsequently hired as an accountant by Pomprowitz Appliance in Green Bay. He later worked at Fred Nick Implement and Standard Oil Company. Arnie's need to serve others led to a lifetime career in the insurance business as a salesman first for Aid Association for Lutherans, then Business Men's Assurance Company of America. Arnie retired from Equitable Reserve Association of Neenah as Superintendent of Agencies 1982. After retirement Arnie's love of golf became a source of great joy (and frustration) for him. Prior to leaving Green Bay, he had weekly tee time with his cronies at Mystery Hills Golf Course whereas, he being the senior player, the group affectionately became know as "Arnie's Army." Arnie's life-long activities as a member of Redeemer Lutheran Church in Green Bay included heading the Stewardship and other committees. He truly loved working with this, the church his father founded. It was genuinely important and had great significance to his life. Arnie, his wife Nicky (Eunice) and Tim, their special needs son, Reluctantly moved to Boise, ID, in Spring of 2005 where their youngest daughter, MaryKim, lives with her husband Brian Allen; and sons, Steven and Scott also live there. Leaving their beloved Green Bay was one of the most challenging decisions made by the Plischke's, as they lived in Wisconsin all of their adult lives except for when Arnie was on active duty. It became evident that moving was God-inspired for both Arnie and Nicky as health issues manifested in their lives, and family members were more readily available to provide needed care. Arnie lived a long life. Survivors include his wife, Nicky, of 64 years. Six children, Pam (Randy) Przybelski, Crivitz, Wisconsin; Bobbie (David) Hafer, Polson, Montana; Steven, Scott, Tim and MaryKim (Brian) of Boise, Idaho. Five grandchildren and great grandchildren, Krista (Steve), Mason, Brayden, and Logan Marvin, Crivitz, WI; Paul Przybelski (Jaime Champagne), & Ashton, Oconto, WI; Kendra Plischke VanZile, Springfield, OH; Lindsey (Steve) Halvorson and Nick (Erin) Allen, Boise, Idaho, and many friends and family. Private family services were conducted in Boise on November 24, 2007. A Funeral Service will be held at 10:30 A.M. on Wednesday, November 28, 2007 in the Chapel at Fort Howard Chapel Mausoleum 1350 N. Military Avenue. In lieu of flowers, memorials in Arnie's name may be made to Redeemer Lutheran Church or Redeemer Lutheran School. The family also extends heartfelt gratitude to Hearts for Hospice, Havenwood Care Center, Bonaventure Place Assisted Living, Bowman Funeral Home all in Boise, and Hansen Funeral Home in Green Bay.

Arno E. Plischke was called home to the peace of his Lord and Savior, Jesus Christ on November 18, 2007. "Arnie" was born to Rev. Walter J. And Minnie (Shultz) Plischke on June 2, 1920 in Westfield, WI. He was raised in Bonduel, WI where his... View Obituary & Service Information

The family of Arno Plischke created this Life Tributes page to make it easy to share your memories.

Arno E. Plischke was called home to the peace of his Lord and...

Send flowers to the Plischke family.