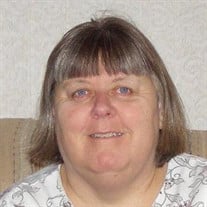 Ardis Elaine (Bergum) Hansen,62, died on Wednesday, August 30, 2017 at home surrounded by her family after a courageous 15-month battle with Non Hodgkin’s Lymphoma. Ardis was born December 18, 1954 to the late Arthur and Elaine Bergum in Madison, Wisconsin. She grew up on the family farm in the Town of Blue Mounds just outside the Village of Mt Horeb, Wisconsin. She was baptized and confirmed at Mt Horeb Evangelical Lutheran Church in Mt Horeb and was later confirmed at Saint Albert the Great Catholic Church in Sun Prairie, Wisconsin. She attended Mt Horeb area schools and graduated from Mt Horeb High School in June of 1973. Ardis began working for the Wisconsin Department of Revenue in October of 1973. While working at the Wisconsin Department of Revenue, she met the love of her life, Eric William Hansen. In her typist position at the Department of Revenue, she typed the Offer of Employment letter sent to Eric when he was hired by the Department of Revenue. They were married in Mt Horeb on September 7, 1985 with a storybook honeymoon in Hawaii. Eric and Ardis moved to Sun Prairie in September 1985 and to Bellevue in April 1987. Ardis began her employment with the Wisconsin Department of Transportation in October of 1987. She retired from the State of Wisconsin in February 2017 after more than 42 years of service. Ardis enjoyed traveling extensively with her husband through the years. She traveled to all 50 United States, all 10 Canadian Provinces, and Mexico..She especially enjoyed the trips to Hawaii, Alaska, British Columbia, Newfoundland, and Prince Edward Island. For the last 20 years, she enjoyed the annual week on the beach at the Condo in Fort Walton Beach, Okaloosa Island, and Destin on the Florida Panhandle. After inheriting the family farm truck, she enjoyed truck camping around Wisconsin, Minnesota, Iowa, and Michigan. She especially enjoyed Point Beach State Forest and Peninsula State Park with all the American Folklore-Northern Sky Theater shows where she was always in the first row. She also enjoyed all the weekends Casino-Camping in Wisconsin and the Upper Peninsula of Michigan. Ardis is survived her husband of 32 years, Eric William Hansen. She is also survived by her Sister Julie (Dennis) Garfoot, Nieces Rebecca (Kevin) Cherek, Terri (Luke) Williams, Great- Nieces Danielle Cherek and Reagan Williams, and Great-Nephew Aidan Cherek. She is also survived by Sister-in-law Mary Schlag, Brothers-in-law Donald Hansen, David Hansen, Dennis Hansen, Mark Hansen and their families. Visitation was held on Wednesday, September 6, 2017 from 9:00 A.M. to 11:30 A.M. at Prince of Peace Catholic Church at 3425 Willow Rd., Bellevue, Wisconsin. The Mass of Christian Burial followed at 11:30 A.M. with Father Dan Viertel officiating. Burial at Prince of Peace-Holy Trinity Cemetery.

The family of Mrs. Ardis E. Hansen created this Life Tributes page to make it easy to share your memories.

Send flowers to the Hansen family.