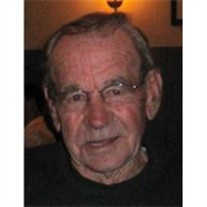 Andrew Flaum Jr, 80, Greenleaf, died unexpectedly and peacefully in his sleep Saturday, December 10, 2011. The son of Andrew and Mary Flaum of Carney MI was born September 17, 1931. On January 28, 1967 he married Lucille Socha. Andrew followed his passions in life. He was a dairy farmer most of his life and owned a dairy farm in Morrison for over 40 years. In retirement, he enjoyed raising steers, his annual fishing trip to Canada, collecting die cast tractors and cars, and most of all, he loved to spend time with his family and friends. He was known for his soft heart for animals and cracking a good one liner. Survivors include his children: Two sons, Daniel, and Louis (Vicky), Two daughters, Cheryl Wagner and her children, Samantha and Shealynn, Jackie (Ron), Two sisters Lucille Ayotte and Dorothy (Robert) Tomasi Andrew was preceded in death by two sons, Kenneth (1997) and Daryl (1978), his parents, and brother in law, Clarence Ayotte . Friends may call from 2:00 P.M. to 4:00 P.M on Saturday, December 17, 2011 at First United Church of Christ 509 South Webster. Prayer Service 4:00 P.M. at the church with Rev. Bob Laubenstein officiating. In lieu of flowers a memorial fund has been established.

The family of Andrew Flaum, Jr. created this Life Tributes page to make it easy to share your memories.

Send flowers to the Jr. family.