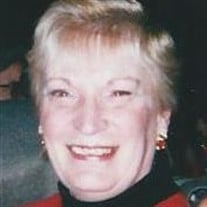 Andrea (Arndt) Perrin, 78, Green Bay, went to be with Jesus on December 30, 2015 after a courageous battle with ALS. Andrea was born on April 21, 1937 the daughter of Walter and Baverna (Raasch) Arndt. She was an LPN and worked in many capacities in Wisconsin. She graduated from East High School in 1955. She also graduated from the Milwaukee Area Technical College in 1957 with a degree in Licensed Practical Nursing. She worked in OB for many years having held positions at Mt. Sinai Hospital, Lutheran Hospital of Milwaukee, St. Michaels Hospital and Community Memorial in Menomonee Falls, WI. Moving back to Green Bay in 1984 and worked at Paddington Station for 7 ½ years. Andrea was last employed until retirement in 2006 at the American Red Cross and really enjoyed her duties there. She married Robert L. Perrin on June 15, 1958 who preceded her in death in 2012. She is survived by two sons and one daughter-in-law R. Scott Perrin, Michael (Lisa) Perrin, five grandchildren Brandon, Zach, Jake, Ben and Hannah. She is further by a niece Stephanie other relatives and friends. She was preceded in death by a beloved brother Steve. All of her life Andrea was so concerned with care giving. Taking care of people and making them feel comfortable in life was her highest goal. Andrea’s favorite Bible passage was Phil 4:13~ I can do all things through Christ who strengthens me. She got through many difficult moments in her life with the help of that passage and God. Gathering of family and friends will be held from 12:00 P.M. until 1:00 P.M. on Tuesday, January 5, 2016 in the Chapel at the Shrine of the Good Shepherd Chapel Mausoleum, 2770 Bay Settlement Drive. A Funeral Service will be held at 1:00 P.M. with Rev. David Hatch officiating. Burial at Nicolet Memorial Gardens. In lieu of other expressions of sympathy a memorial fund has been established in her name. Andrea wishes to extend her loving best wishes to all who knew her on Earth and to remember this~ “If you think of me sadness, don’t remember me at all, but if you remember me with happiness and gladness~ thank the Lord for giving Life to All!”

Andrea (Arndt) Perrin, 78, Green Bay, went to be with Jesus on December 30, 2015 after a courageous battle with ALS. Andrea was born on April 21, 1937 the daughter of Walter and Baverna (Raasch) Arndt. She was an LPN and worked in many capacities... View Obituary & Service Information

The family of Mrs. Andrea Lea Perrin created this Life Tributes page to make it easy to share your memories.

Send flowers to the Perrin family.