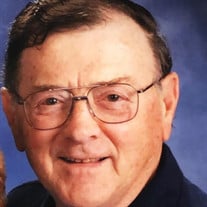 Allan Ross Pagel, 85, passed away from natural causes on Sunday, June 14th, 2020. Allan was born on May 14, 1935 in Orangeville, Illinois to the late Otto Emmanuel and Hulda Morris Pagel. Allan’s early years were spent living on dairy farms in southern Wisconsin. He played sports in high school and especially enjoyed playing football. He graduated from South Wayne High School in 1953 and joined the navy right after high school, fulfilling a childhood ambition of being a sailor. He served in the U.S. Navy from 1953 to 1957. Allan was joined in marriage to Rosemary Feller at First United Church of Christ in New Glarus, Wisconsin on November 24, 1961. Some of his early work experiences including working for a heating and plumbing shop in Monroe, WI, owning and operating a hardware store in Monticello, WI, and working in Madison for the local union as a plumber. Allan and Rosemary moved to Wisconsin Rapids, WI in 1966 and then moved the family to Kaukauna in 1968 where he continued to work in the union for the next 2 years. In 1970, the family relocated to Green Bay where Allan continued to work in the construction business as a plumber and then a steamfitter in Local Union #298. Of all his work, Allan was most proud of the fact that he helped build the Kewaunee nuclear plant. He was a proud 50-year member of The United Association. In 1973, the family moved one final time to their current home in the country in Denmark, Wisconsin. Allan loved living the country life, he enjoyed his mules, and loved having his children and grandchildren help him with farm work throughout the years. One of Allan’s favorite past-times was attending auctions. He enjoyed finding books that he donated to friends and family. He had the spirt of an entrepreneur, starting and running Highway 29 Storage and Pets at Rest. Even at age 85, Allan was considering starting a beef cattle business with his son-in-law Dennis. He will be remembered for his independent, creative and passionate nature. Allan is survived by his wife, Rosemary, his children, Liz (Jeff Smukowski), Jen (Dennis) Pontzloff, William (Amy) and Andrew; grandchildren Amanda (Tim) Steffek, Adam (Hanna) Pontzloff, Jack Smukowski; great-grandchildren Cody and Blake Steffek; sister, Mary Harrison, sisters-in-law, Marie Pagel and Karen Pagel. He was preceded in death by parents, Emmanuel and Hulda, father and mother-in-law, Herman and Marie Feller, brothers, Daryl and David, sister, Doris Seffrood, brothers-in-law, Clynton Seffrood and Charles Harrison. A private service will be held on Saturday, June 20, 2020 at First United Presbyterian Church, De Pere, Wisconsin. In lieu of flowers, the family requests memorials to your favorite charity in Allan’s name.

The family of Mr. Allan Pagel created this Life Tributes page to make it easy to share your memories.

Allan Ross Pagel, 85, passed away from natural causes on Sunday,...

Send flowers to the Pagel family.