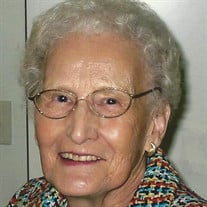 Alice Marie Kalinosky, 85, Green Bay passed away peacefully on Tuesday, September 23, 2015 at Angels on Arcadian. Alice was born on January 22, 1930 in Green Bay the daughter of the now late Wilbur and Mary (Delwiche) Hansen. On April 15, 1950 she married Robert “Bob” Kalinosky at St. Philip the Apostle Catholic Church and the couple enjoyed over 46 years together. Bob preceded her in death on February 20, 1996. Alice worked in the health care field all of her life both at St. Vincent Hospital and Green Bay Radiology in patient accounts. She was a devoted wife, mother, grandmother and great-grandmother who cherished her large extended family gatherings and being able to spend time with everyone. Alice is survived by one daughter and son-in-law Diane and Don Klarkowski, 4 grandchildren David (Kelli) Klarkowski, Brian Klarkowski (Kelly Beth), Jacqie (Kyle) Will, Andy (Mindy) Klarkowski, 6 great-grandchildren Aidan, Cailyn, Willow, Sophia, Jack, and Finn. 1 sister and brother–in-law Jeanie (Don) Radke, her sisters-in-law and brothers-in-law Patricia Hansen, Doris Kalinosky, Betty Kay, Norbert (Thelma) Kalinosky, John Kalinosky. She is further survived by many special nieces, nephews, other relatives and friends. She was preceded in death by 3 brothers and 1 sister-in-law Bill Hansen, Dick (Elaine) Hansen, Donne Hansen, her sisters-in-law and brothers-in-law Marty Kalinosky, Ed (Dorothy) Kalinosky, Ray Kalinosky, Ellie (Ed) LaForce, Rita Kalinosky. Gathering of family and friends will be held from 2:00 to 4:30 P.M. on Tuesday, September 29, 2015 at St. Jude Catholic Church 1420 Division Street. A Mass of Christian Burial will be held at 4:30 P.M. with Rev. Ryan Starks officiating. Burial at Allouez Catholic Cemetery. In lieu of flowers a Memorial Fund has been established in her name. The family would like to offer a warm note of appreciation to the staffs of Bishops Court, Angels on Arcadian,Hospice Advantage and Doctors Rhonda Steffel and Patricia Demery for all of their loving care and compassion shown to Alice and her family. Also, a heartfelt thank-you from Diane and Don and family to all those who gave of their time to be with Alice, pray with her and supported them during this time~ your kindness will never be forgotten.

Alice Marie Kalinosky, 85, Green Bay passed away peacefully on Tuesday, September 23, 2015 at Angels on Arcadian. Alice was born on January 22, 1930 in Green Bay the daughter of the now late Wilbur and Mary (Delwiche) Hansen. On April 15,... View Obituary & Service Information

The family of Mrs. Alice M. Kalinosky created this Life Tributes page to make it easy to share your memories.

Send flowers to the Kalinosky family.