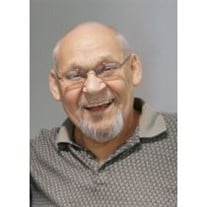 Alex Pogorzelski, 70, died peacefully at home in the arms of his daughter on Aug. 19, 2011 after a long, courageous battle with cancer. He was born August 28, 1940 in Borisov, Russia to Josef and Helena Pogorzelski and immigrated to the U.S. with his family in 1950. Alex went to school in Moorhead, MN and graduated from Shanley High School in Fargo, ND. He served in the U.S. Army Military Police 1962-65 as a sentry dog handler. That lead to several years of owning and training German Shepherd dogs. Alex married Cathy Dalzell on October 22, 1966 at St. Joseph’s Catholic Church, Moorhead, MN. They moved to Green Bay in 1969. He was employed by Packerland Packing Co. for 29 years. Changes there sent him to St. Vincent Hospital to work in security until his retirement in 2006. Alex enjoyed many years of bowling and was a proud member of the Green Bay Bowling Hall of Fame along with all his teammates. He was an avid card player and enjoyed many hours playing with friends and family. His best days were spent on a lake fishing. He always said catching one was a bonus. Cooking was a passion and he especially loved sharing his results with others. He is survived by his wife, Cathy; their daughter, Nicole (Keith) Walter and four very loved grandchildren; Alex, Isabelle, Arielle and Keilee, Hurricane, Utah. He is further survived by his brothers, Wladyslaw (Pat), Belton, TX, and John (Donnelle), Moorhead, MN; in-laws, Vernon and Marie Dalzell, Walhalla, ND; brothers and sisters-in-law, nieces, nephews and cousins-in-law. Also, Roos Wijnhoven (exchange student/daughter), The Netherlands, and many close friends. He was preceded in death by his parents and dear aunt, Jadwiga Pogorzelski. Visitation will be held Saturday, Aug. 27, 2011 at St. Philip the Apostle Parish, 312 Victoria St., Green Bay, WI at 9:30 a.m. A memorial Mass will follow at 11:00 a.m with Rev. Jose′ Antonio Castaneda officiating. In lieu of flowers the family would appreciate donations to Unity Hospice. The family wishes to thank the teams at Green Bay Oncology and Unity Hospice for their compassionate care of Alex. Words for all of us from his 4 year old granddaughter, “Grandpa will always be alive in our hearts.”

Alex Pogorzelski, 70, died peacefully at home in the arms of his daughter on Aug. 19, 2011 after a long, courageous battle with cancer. He was born August 28, 1940 in Borisov, Russia to Josef and Helena Pogorzelski and immigrated to the U.S.... View Obituary & Service Information

The family of Alex Pogorzelski created this Life Tributes page to make it easy to share your memories.

Alex Pogorzelski, 70, died peacefully at home in the arms of...

Send flowers to the Pogorzelski family.