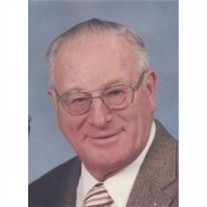 Albert John Hinrichs, 86, Green Bay, passed away on Friday, August 24, 2012 at Parkview Manor Nursing Home after a long battle with cancer. Al was born on September 12, 1925 in Delmar, Iowa, the son of the late Carl and Anna (Lindholm) Hinrichs. He had 11 siblings. The family moved to Klondike, Wisconsin. As a young man Al worked on various farms in N.E. Wisconsin and Upper Michigan. Al served his country in the U.S. Army during W.W. II from 1944 until his honorable discharge in 1946. He served in the U.S. Army Infantry, island hopping through the Philippines during the war, and served in Japan during The Occupation after the war. On June 30th 1951 he married Betty Jane St. Martin. They had four children. In 1950 Al started working for the Chicago and Northwestern Railroad in Escanaba, Michigan. Then worked for them in Wisconsin along the Eastern rails. He retired as an Engineer after many years. He also ran a commercial fishing boat on the Bay of Green Bay as well as on Lake Michigan. After retirement Al married Carol Bowman. They ran a resort called “Hinrichs Folly” in Boulder Junction, Wisconsin. They then retired to Fremont, Wisconsin. After losing Carol, Al moved back to Green Bay in his final years. Al loved fishing, hunting and being outdoors. He was a pilot at one time but gave it up after crashing a small plane. He always loved going to the EAA. “Big Al” was well liked and known for his storytelling ability. His favorite place to have a hamburger and wings was at the Goal Post Inn near his home. Al is survived by three daughters, Cathi Gardner, Debbie (Roy) Zakowski, and Joan (Steven) Wright, and one Son, Karl (Janet) Hinrichs, There are also nine grandchildren: Katie (Eric) LeBarron, Kari Hinrichs, (Little) Roy Zakowski, Justin (Jamie) Zakowski, Andrew (Alexandra) Zakowski, as well as Jeremy, Brad and Jesse Wright. There are also two great-grandchildren, Nicholas and Kaleb. Al is survived by two sisters, Elsie and Darlene, of Wisconsin, and two brothers, Gerald Weller of Texas, and Dean Weller of Wisconsin. Al is also survived by many nieces and nephews. The family would like to acknowledge Al’s longtime friend, Artis Bredell, and give many thanks to his neighbors George and Butch for their kindness and help in his last months at home. Also a special thank you to Heartland Hospice and the staff at Parkview Manor for all of their loving care and concern at the end of his life.

Albert John Hinrichs, 86, Green Bay, passed away on Friday, August 24, 2012 at Parkview Manor Nursing Home after a long battle with cancer. Al was born on September 12, 1925 in Delmar, Iowa, the son of the late Carl and Anna (Lindholm) Hinrichs.... View Obituary & Service Information

The family of Albert Hinrichs created this Life Tributes page to make it easy to share your memories.

Send flowers to the Hinrichs family.